As always, it is Twitter that tells me it is #WorldHelloDay today – ooooh hello there, did you even have an idea. And while upon hearing ‘Hello!’ most of us are likely to break into a rendition of Adele’s massive 2015 hit, there have been other, perhaps equally famous hellos in our lives.

But first, Adele. On 23 October 2015, Adele dropped the first single off her third studio album, 25, with the opening salvo,  “Hello, it’s me; I was wondering if after all these years you’d like to meet…” and the whole world went kind of crazy. The song which reached number one in almost every country it charted in, is almost a soulful love letter to or conversation with an ex.  Speaking on the song’s lyrical content, Adele told Nick Grimshaw on The Radio 1 Breakfast Show: “I felt all of us were moving on, and it’s not about an ex-relationship, a love relationship, it’s about my relationship with everyone that I love. It’s not that we have fallen out, we’ve all got our lives going on and I needed to write that song so they would all hear it, because I’m not in touch with them.”According to Adele, the line “Hello from the other side” signifies “the other side of becoming an adult, making it out alive from your late teens, early twenties.”

The video directed by Xavier Dolan and co-stars Adele and Tristan Wilds broke the Vevo Record by achieving over 27.7 million views within a 24-hour span, held previously by Taylor Swift’s “Bad Blood” which accumulated 20.1 million views in that timeframe as well as breaking the record for shortest time to attain 100 million Vevo views, previously held by Miley Cyrus’ “Wrecking Ball”, as well as shortest time to reach 1 billion YouTube views (88 days).

Within weeks, almost anyone from Rita Ora to Demi Lavato, from the Southern Michigan University Marching Band to the Nigerian songstress Omawumi had covered the song. 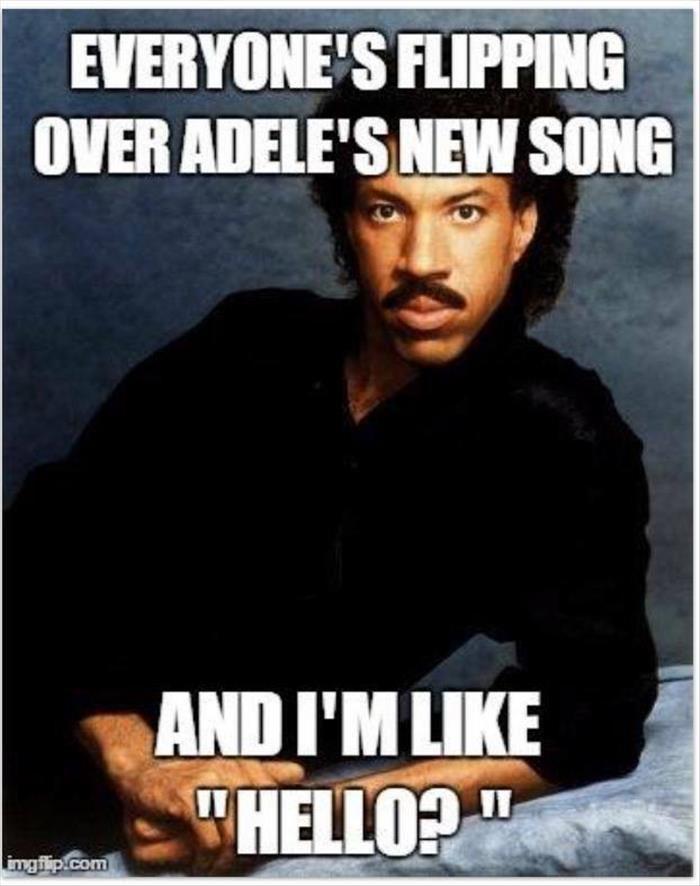 But wait a minute, we’d heard that opening line before, surely? Some 30 years ago, from a man named Lionel Richie to be exact. As opposed to Adele’s plea to have a conversation with former friends/lovers, Richie’s was a plea to a potential future lover as the greeting was followed by “Is it me you’re looking for?” The third single from Richie’s multi-platinum album Can’t Slow Down, released in 1984, the song which Richie initially considered too corny reached number one on three Billboard music charts: the pop chart (for two weeks), the R&B chart (for three weeks), and the adult contemporary chart (for six weeks).

The music video, directed by Bob Giraldi, features the story of Richie as a theater and acting teacher having a seemingly unrequited love for a blind student (Laura Carrington) until he discovers she shares the feeling as demonstrated by the discovery that she is sculpting a likeness of his head  – rather creepy by today’s standards.

‘You had me at hello’ – Jerry McGuire

Before Bridget Jones, there was Dorothy. In 1996, American romantic comedy-drama sports film, Jerry McGuire, written, produced and directed by Cameron Crowe, and stars Tom Cruise, Cuba Gooding, Jr. and Renée Zellweger, introduced to our common consciousness one of the most memorable romantic comedy lines. At the end of the movie – spoiler alert! – when Jerry expresses his love in a long-winded speech to Dorothy, Dorothy’s reply was the simple phrase: “You had me at hello.”

Admittedly, one movie line made famous in the cult classic Scarface is one that is far deadlier greeting than the previous hellos. Out of the many memorable quotes by the unforgettable Tony Montana (played by Al Pacino), throughout director Brian De Palma’s remake of the 1932 gangster classic, none is more iconic than his final shot as he screams “Joo wanna play rough?! Okay! Shay ello to my lil frien!!!!!” as he blasts the doors with his ‘little friend.’

This one’s for us Generation X who once thought having a Motorola flip phone was the height of cool. The once popular ad slogan introduced to pupular culture by Motorola recently had a revival with a new ad campaign by Ogilvy & Mather in the brand’s first TV commercial since 2011 which takes a dig at the mobile giants of the modern age and their lack of innovation in the year 2016, reminding the consumer that there are other viable alternatives out there.