It doesn’t get more British than afternoon tea but one has to admit there is something both delightful and soothing about having cake and scones in the afternoon washed down with a cup of coffee. The tradition, it is believe, started when, the 7th Duchess of Bedford, fed up of just having two meals a day, breakfast and dinner, with hours between them, opted for a sneaky snack in her bedroom in the afternoon. Soon enough she proved bodacious enough to snack in the dining room and invite her friend to join her and thus began the long revered tradition of the British afternoon tea.

True, during those few precious afternoon hours which should be the reserve of tea ritual, most of us are still stuck in offices most afternoons trying to fight off hunger pangs, late afternoon slump and the work piling up on our desk, there is nothing like a little escapade to treat yourself to tea and delicacies. Make like the Duchess, and try to sneak in a treat this week. Here are the coolest, quirkiest spots to take afternoon tea. 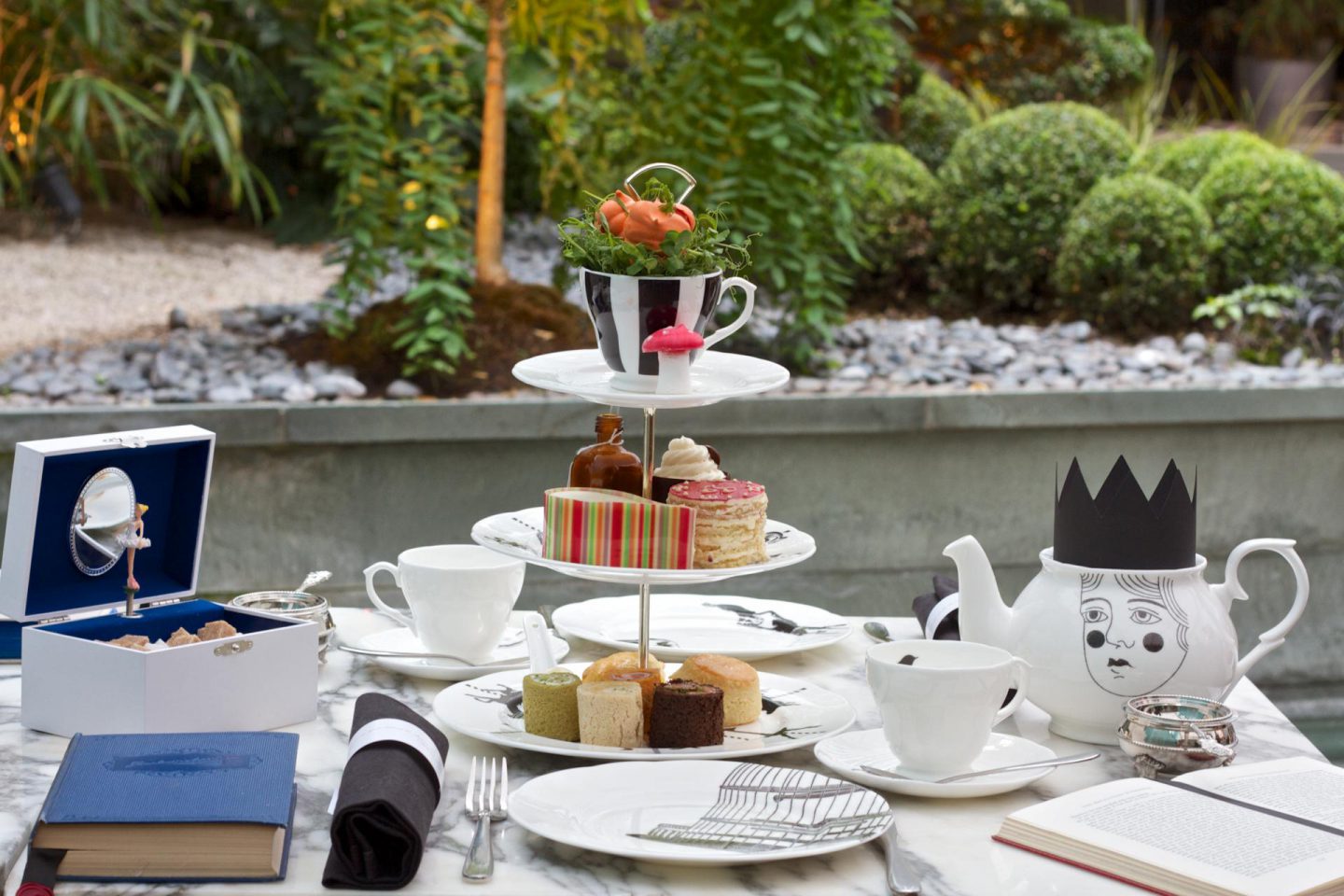 In celebration of the 150th anniversary of Alice in Wonderland, Sanderson is inviting us to tumble down the rabbit hole and enjoy all the splendor of the Mad Hatter’s Afternoon Tea. Here you will discover menus hidden inside vintage books, teapots adorned with kings and queens, sandwich plates decorated with birdcages, carousels and ticking clocks upon which rest savoury, specialty sandwiches. The delicacies are eqaully quirky: think chocolate-coated, coffee-flavoured Pocket-Watch Macaroons and red velvet Ladybird cake. There are also five new, tailor-made teas inspired by the characters of this beloved story. “Alice” has transformed into China Black Tea infused with hints of blackcurrant, vanilla, caramel, citrus, bergamot, blue cornflowers and blue mallow flower 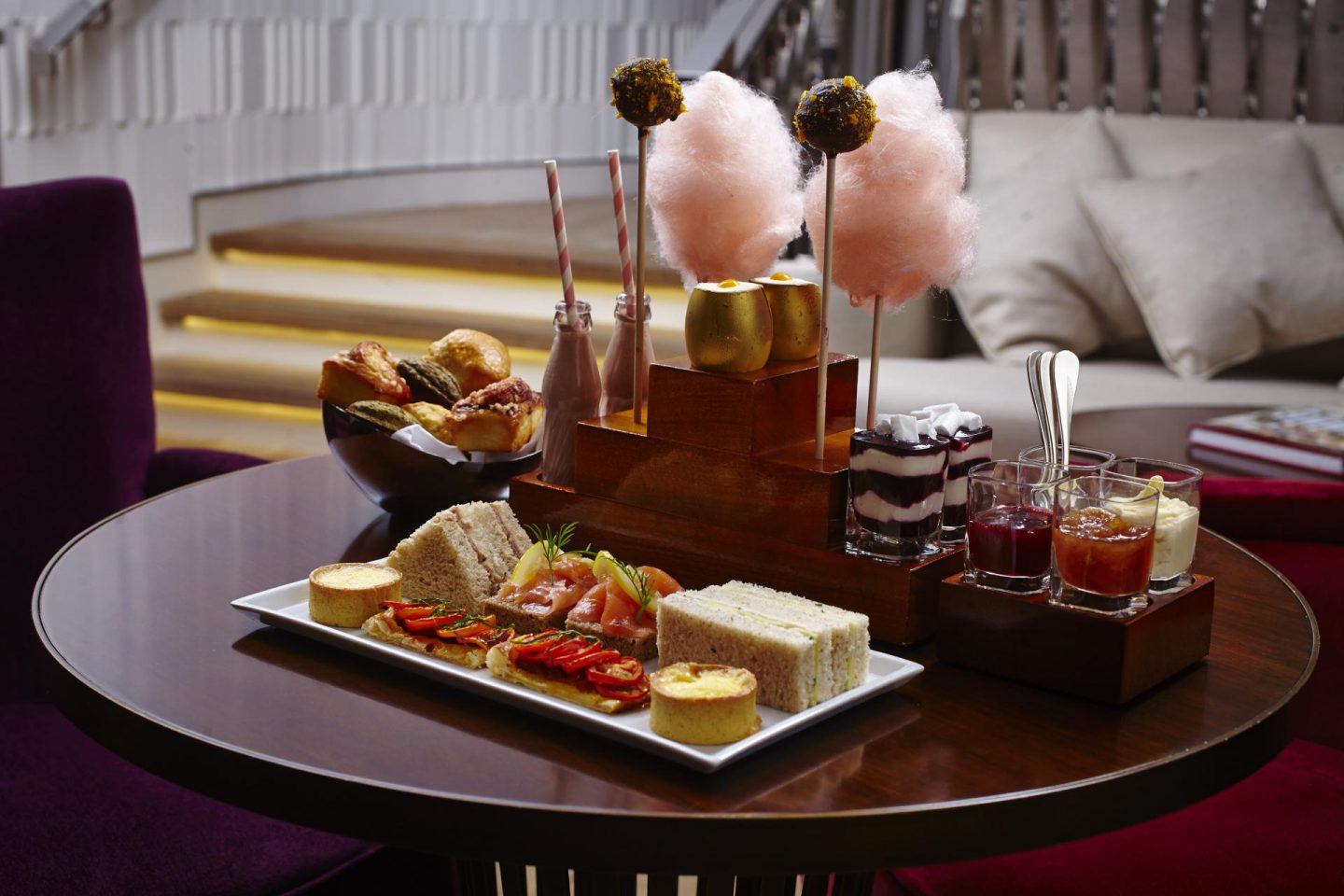 Charlie and the Chocolate Factory Afternoon Tea at One Aldwych 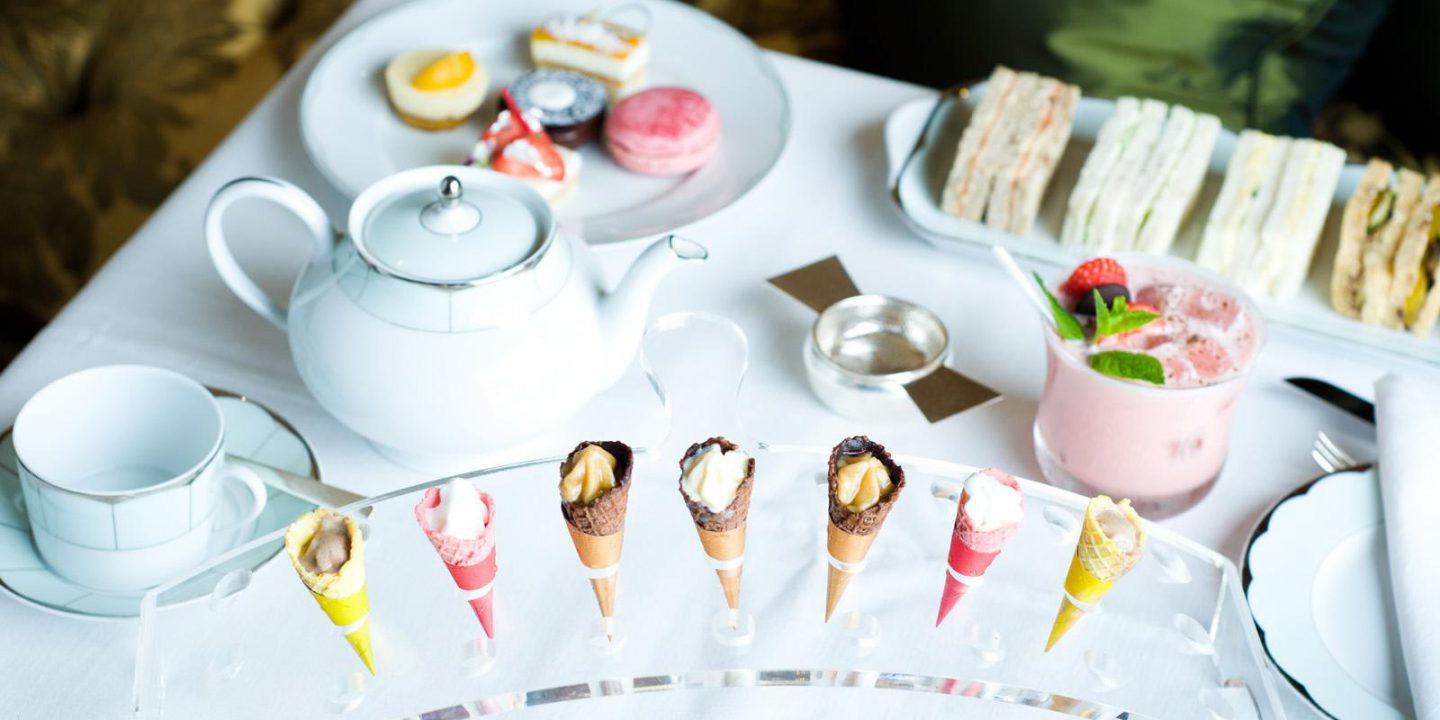 Since opening in 1931, The Dorchester has served the finest afternoon tea in London. Available throughout August, Ice Cream Champagne Afternoon Tea is sure to be a sophisticate and ‘cool’ affair at The Promenade, set in the heart of the hotel offering maximum opulence. Served with a glass of Laurent-Perrier Champagne (Brut or Rosé), the afternoon tea features a selection of sumptuous finger sandwiches, French pastries and house-made ice cream cones. 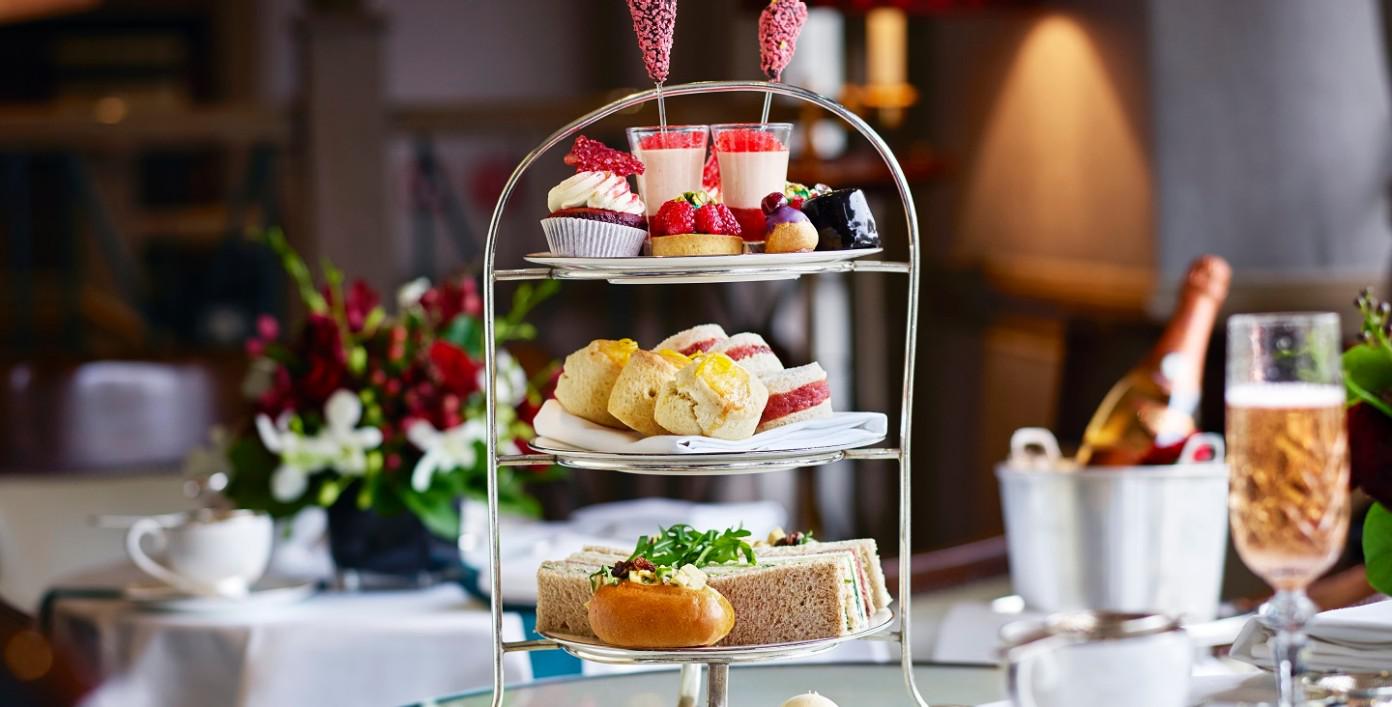 Royal Afternoon Tea at The Rubens

Afternoon tea with the Queen? Not exactly but you can feel like true royalty at The Rubens sitting back in our Palace Lounge overlooking the Royal Mews of Buckingham Palace. The menu is inspired by Royal events and dining trends throughout the centuries from Her Majesty the Queen’s much-loved jam pennies to the red velvet cupcakes influenced by the House of Stuart or the chocolate biscuit cake, a favourite of Prince William and Prince Harry of the House of Windsor, all served with a selection of delightful blends from the Twinings collection. 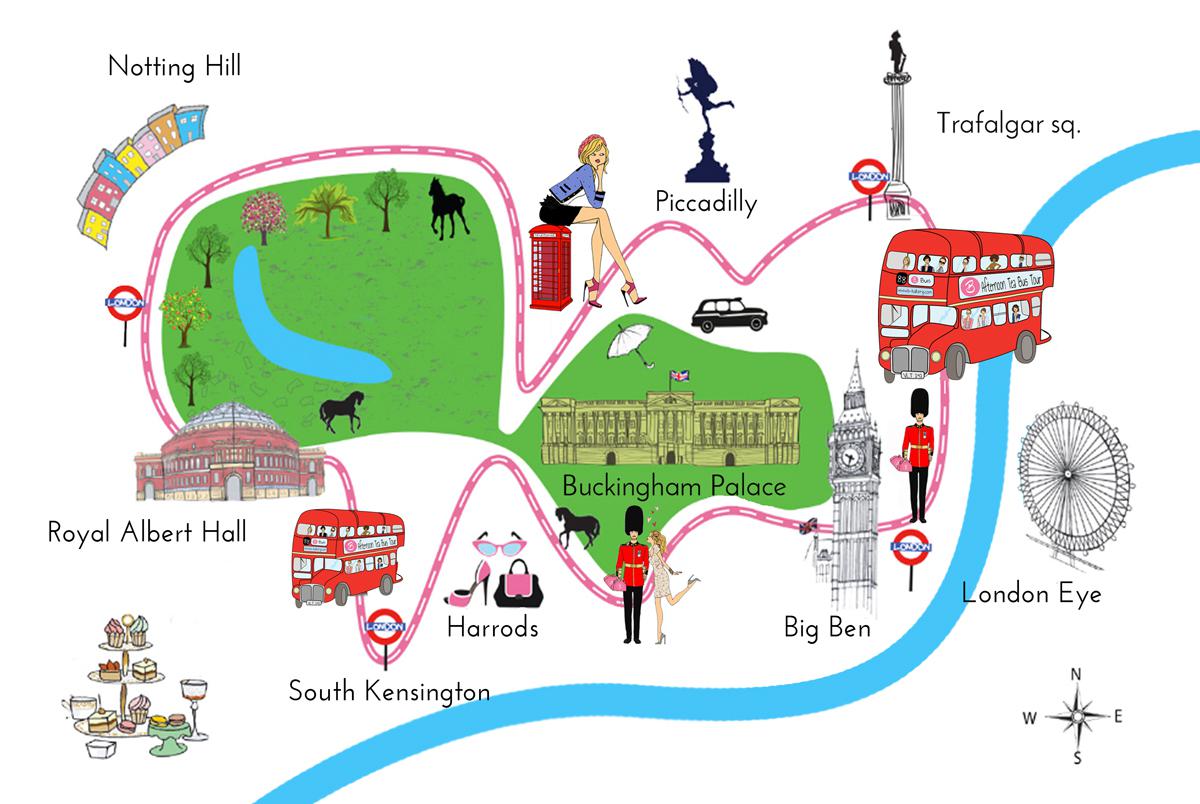 One of the top things to do when in London is to take a bus tour of the city which will allow you to take in exceptional views and historic landmarks from the comfort of your upper deck seat. B Bakery’s Afternoon Tea Bus Tour is the same concept but for tea lovers. Just hop on a Routemaster from Northumberland Avenue or Victoria Station and take in the sights and sounds of the city while sipping on your tea. Some of the sights you’ll see includeThe London Eye, Big Ben, The Houses of Parliament, Westminster Abbey, St James’s Park, Buckingham Palace, Hyde Park, The Royal Albert Hall, Marble Arch, Piccadilly Circus, Nelson’s Column, Downing Street and more. The menu offers a selection of macaroons ad cup cakes as well as mini quiches and sandwiches. For the nautical tea lover, B Bakery also has on offer Afternoon Tea Boat tour.