Another Met Gala has come and gone, leaving with us a plethora of white carpet moments and celeb style wins and loses.

The Metropolitan Museum of Art Costume Institute benefit, a black-tie gala held the first Monday in May to raise money for the Costume Institute – the only one of the Met’s curatorial departments that has to fund itself – affectionately referred to as ‘The Oscars of the East Coast’, saw megastars and rising starlets walk the white carpet before the launch of this year’s exhibition.

The hosts are Anna Wintour (the Wizard of Oz for this particular event), Tom Brady, Gisele Bündchen, Katy Perry and Pharrell Williams; honorary chairwomen are Ms. Kawakubo and Caroline Kennedy, the former United States ambassador to Japan this year’s exhibition was “Rei Kawakubo/Comme des Garçons: Art of the In-Between”

To understand the 74-year-old Japanese designer’s legendary status just consider that the Costume Institute has not devoted an entire show to a single, living designer since Yves Saint Laurent in 1983. Featuring about 120 Comme des Garçons womenswear designs by Kawakubo, dating back to the label’s first runway collection in 1981, the exhibition explores the designer’s fascination with “in-betweenness” by arranging the pieces by contrasting themes (East/West, male/female, past/present).

Known for bold, experimental clothing, Kawakubo’s work is defined by architectural lines, structural play and elements that add volume, shape and distortion, best exemplified by her Spring/Summer 1997 Body Meets Dress, Dress Meets Body show – remembered by many as the “lumps and bumps” collection, and her most recent show, Autumn/Winter 2017’s The Future of the Silhouette.

As for the white carpet? While most of the celebrities and their designer buddies seemed to have missed the memo (I am looking at you, Kim K-W!), there were a few, including the high priestess of haute couture, Rihanna who got it right. 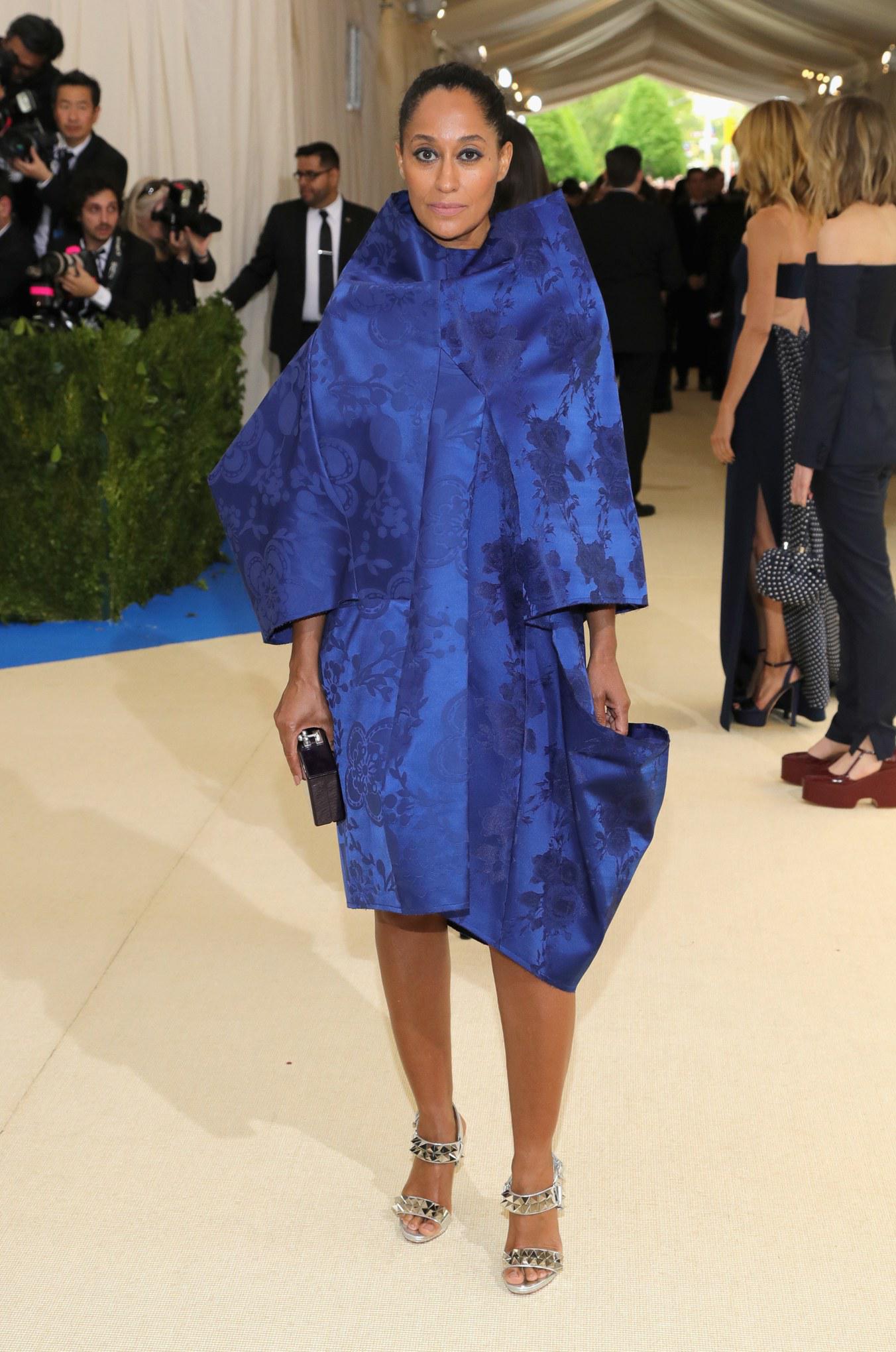 The Blackish star was like the A star student in class – she arrived early, posed sweetly and followed the theme to a t in this asymmetrical Comme des Garçons cobalt blue mini. 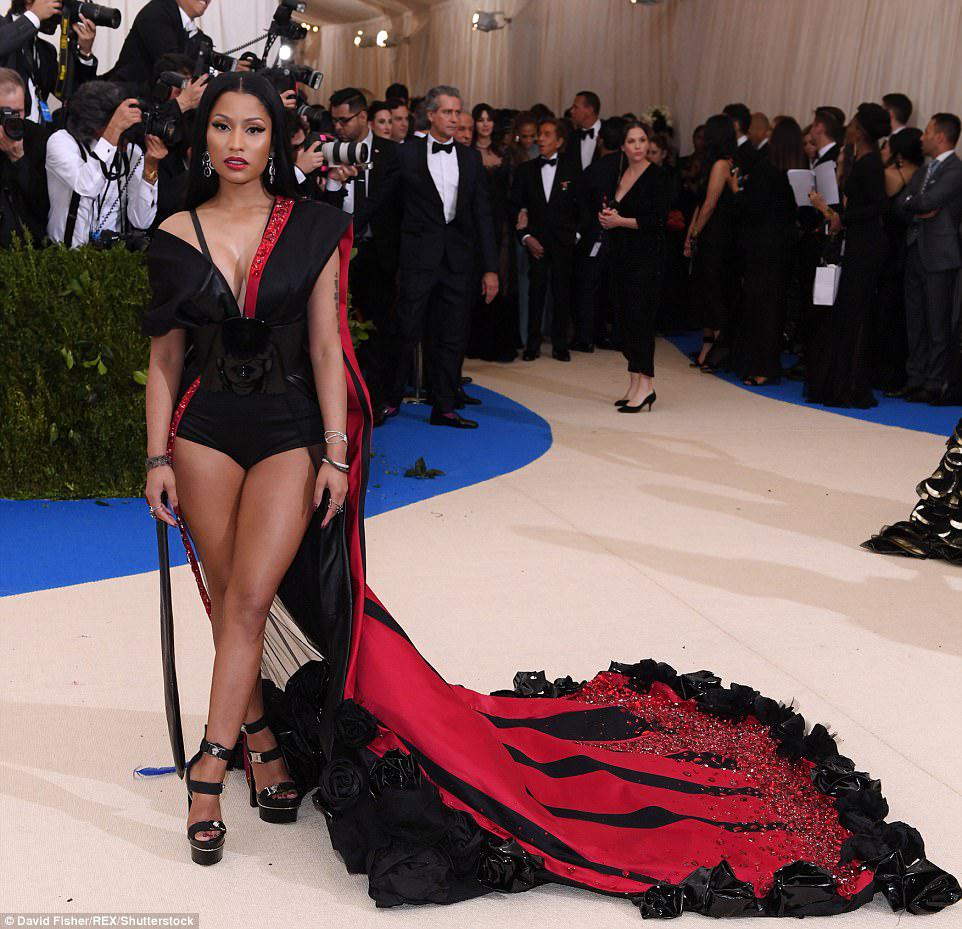 Currently working on a collection with high street label H&M, the rapper didn’t disappoint in the label’s interpretation of the theme: the gown featured satin kimono cinched with a belt showing the face of the designer Kawakubo. 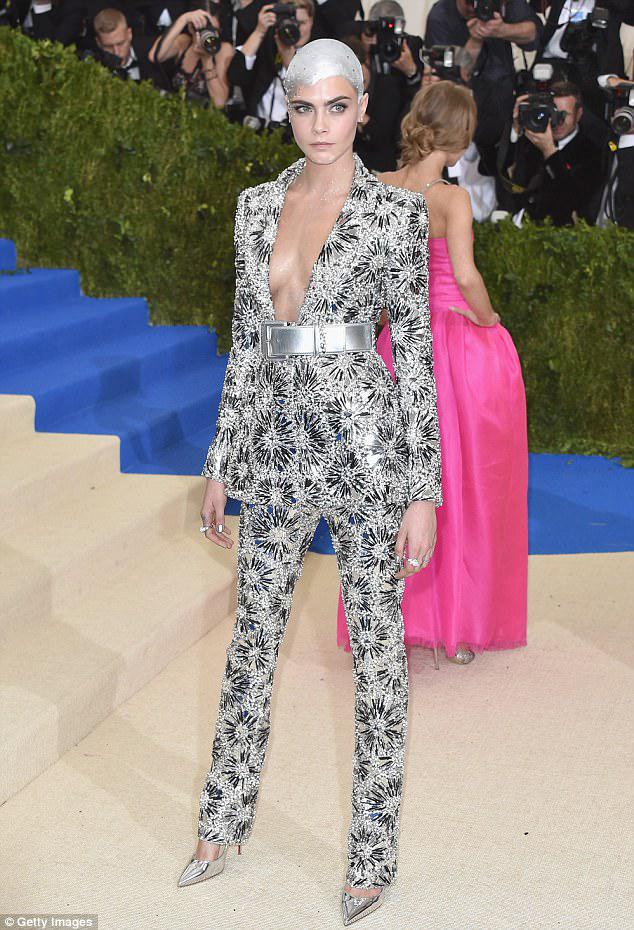 Brit model of the famed brows made a dramatic statement matching her silver dyed head to her metallic plunging silver suit by Chanel. 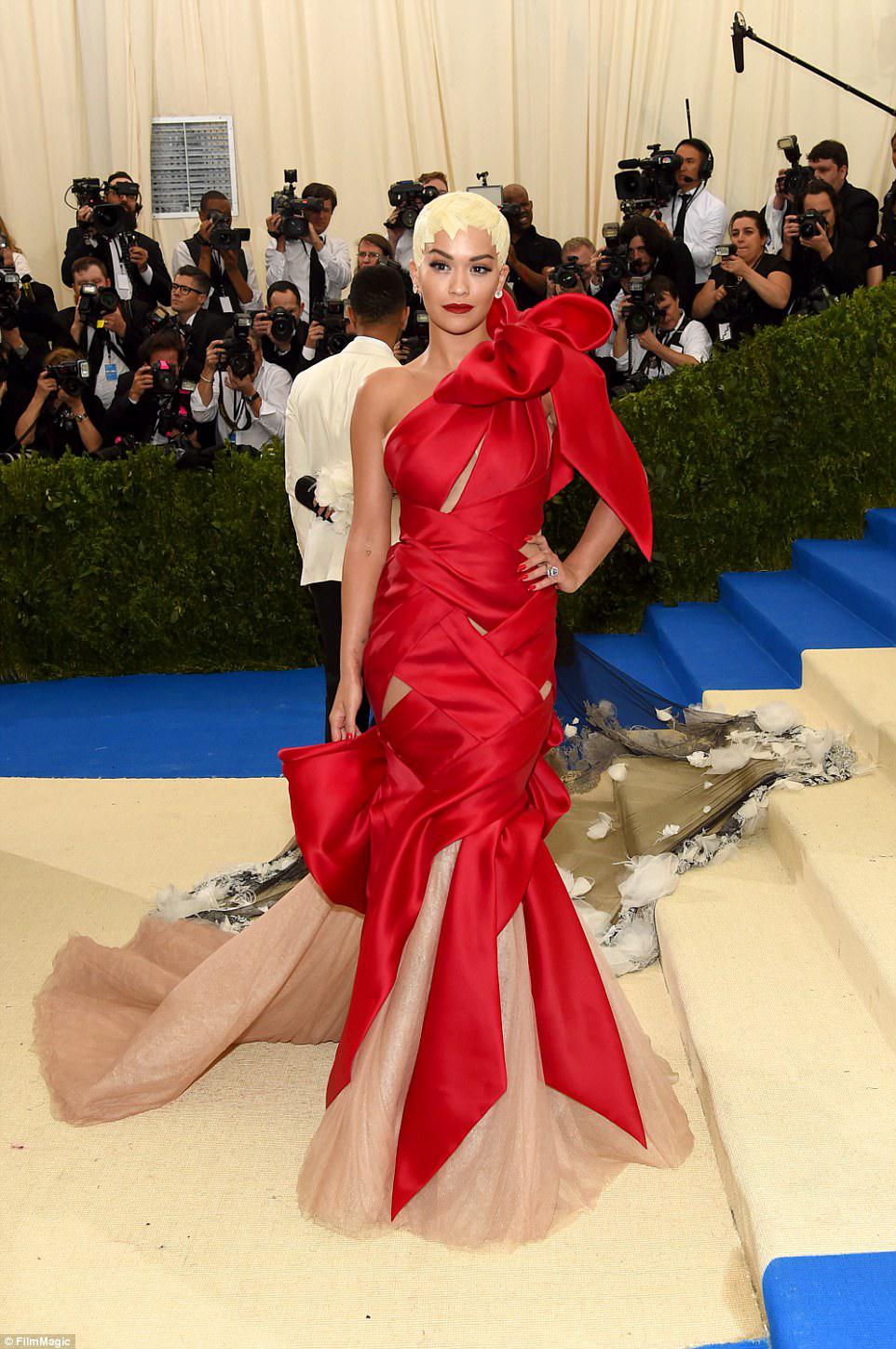 The singer wore an elaborate red ribbon dress with a pink underskirt and a trailing black and white train, by Marchesa . The oversize box were a stylish and low key nod to this year’s theme. 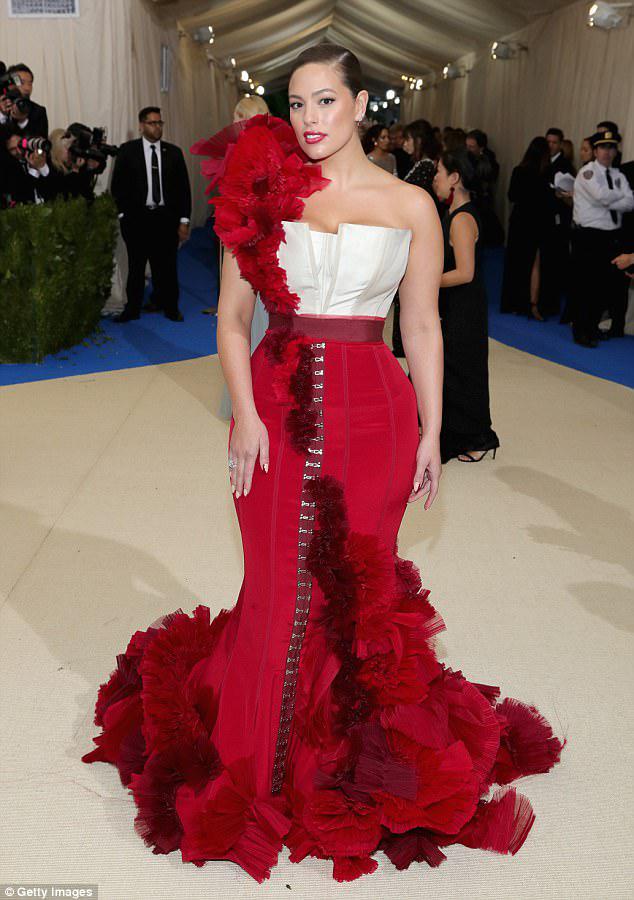 So Ashley and yet so Kawakubo in a custom H&M corset dress influenced by the designer’s interest in revealing the inner workings of garments. Speaking with E! News  the model said: ‘[Kawakubo] is all about shapes and all about the deconstruction…But, we had to make it very Ashley, so we have the body in between it all.’ 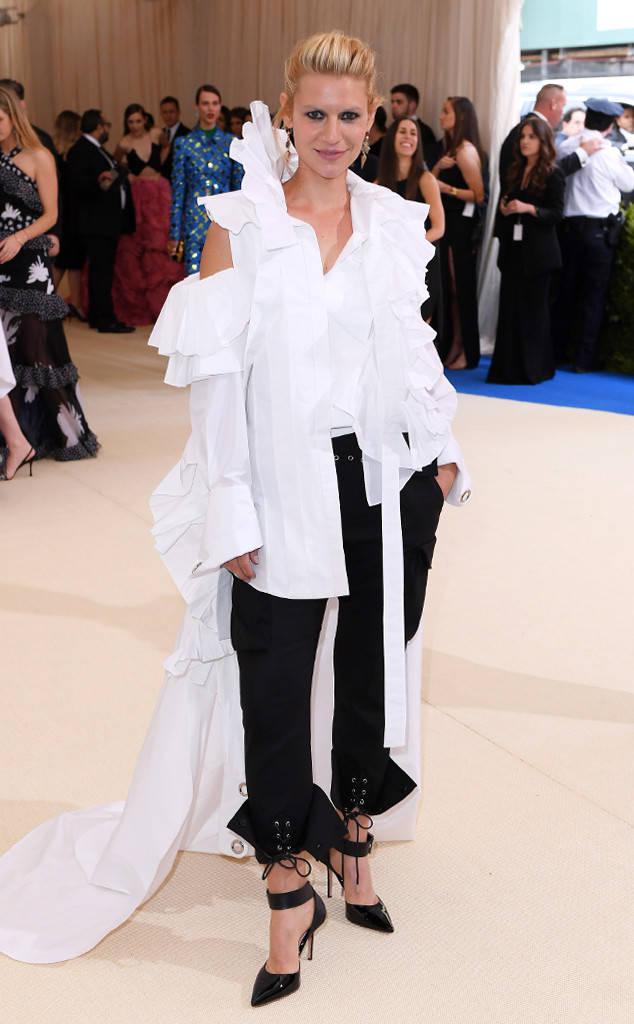 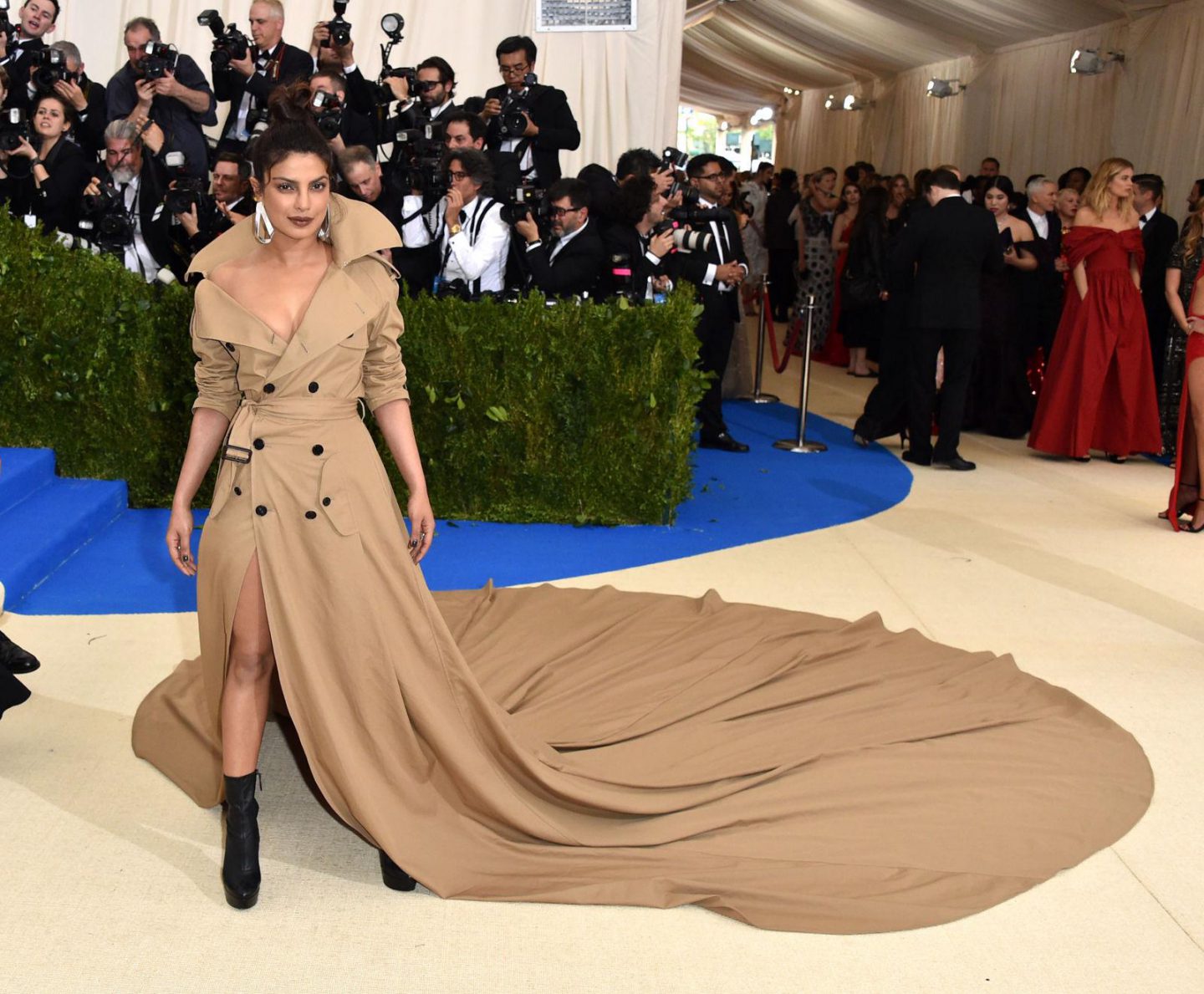 The actress played fast and loose with our fashion expectations in this Ralph Lauren trench featuring a train and daring skin-baring elements. 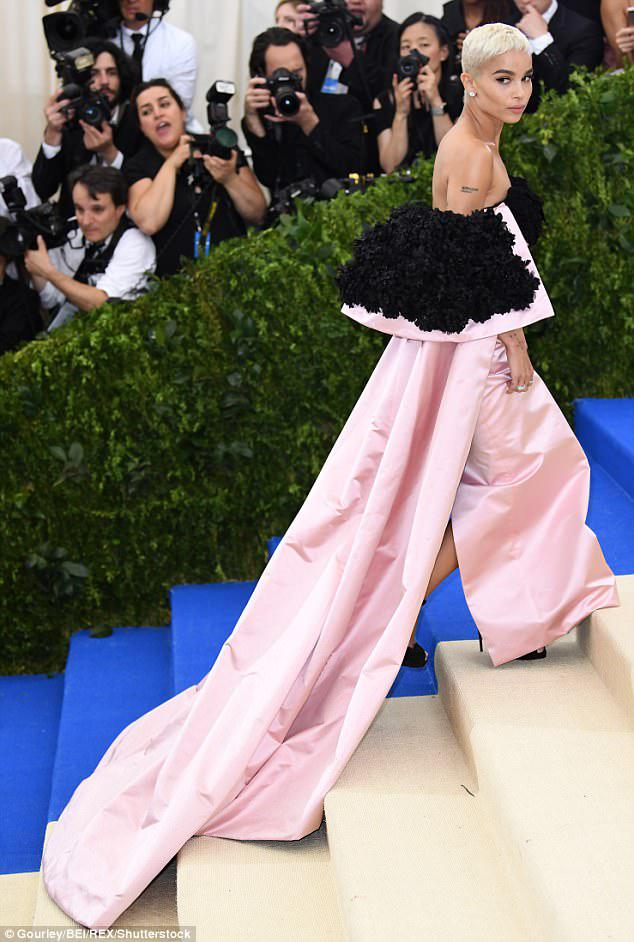 The actress gave us all a lesson in marrying grace and art in this pink duchesse satin dress by Oscar de la Renta featuring a straight, structured design, adorned with black floral appliques. 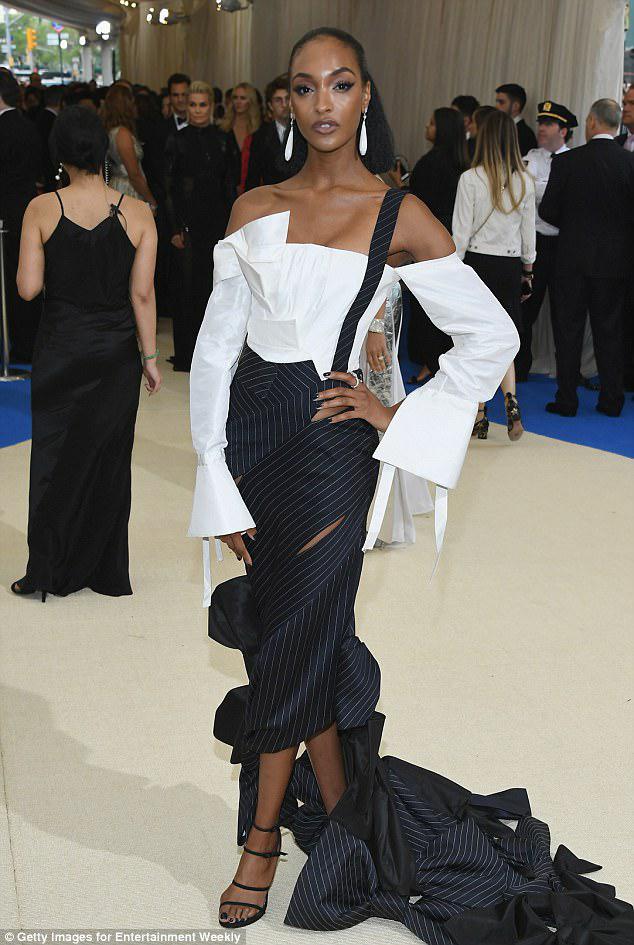 Another celeb who opted for custom H&M was Jourdan Dunn with this white and navy pinstripe dress that played with the theme of deconstructing and subverting traditional garments. 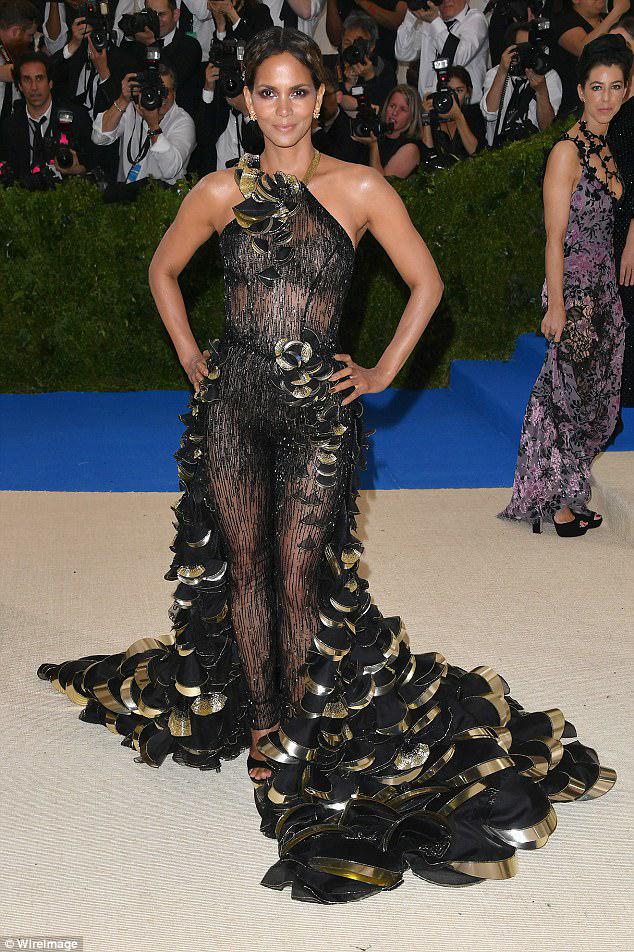 It has been a while since we saw Halle in cat suit! Halle dazzled in this glam sheer Versace catsuit. The finishing touch? The statement train with shiny gold detailing. 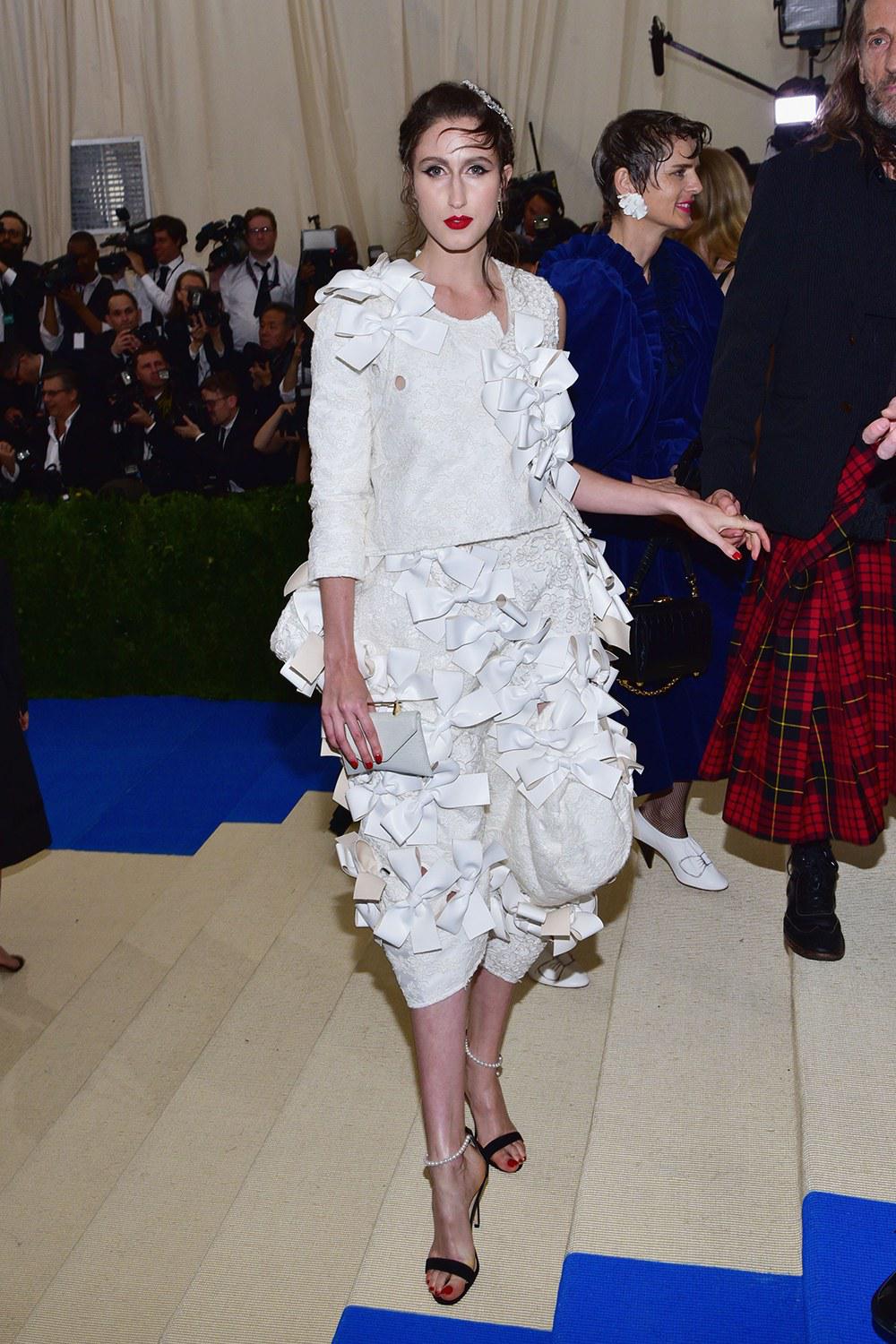 Model Anna Cleveland gives the celebs who missed the memo on this year’s theme a lesson in understated Comme des Garçons chic in an off-the-runway look from the Spring 2015 “Blood and Roses” show. 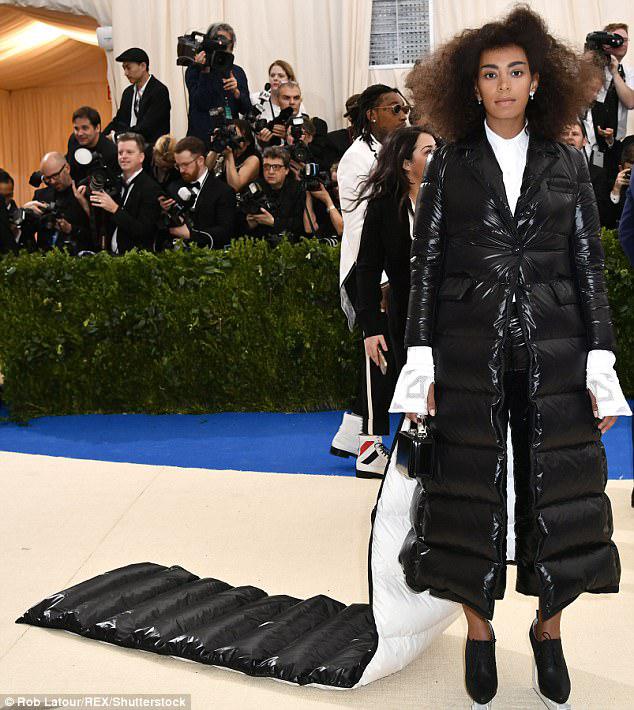 It seems Solange couldn’t be bothered to play dress up this year and took Kawabuko’s anti-fastion aesthetic to heart when she opted for this Thom Browne parka dress with a train which she compared to a sleeping bag on social media. Paired with ice skating shoes – a Met Gala first, surely? But she is Solange, and so she is on this list. 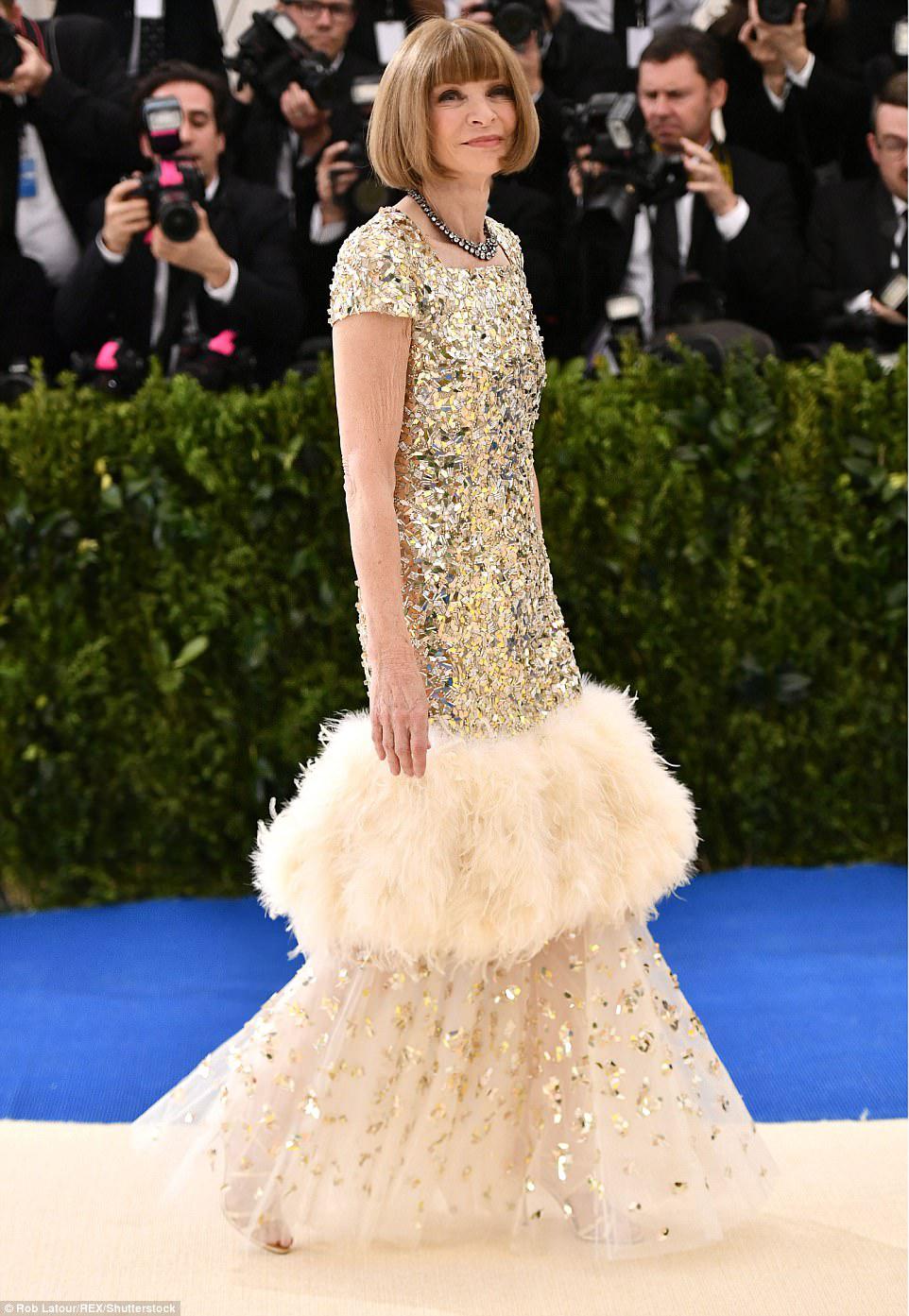 In keeping with the evening’s theme, The Wintour’s golden dress included an array of textures, featuring fur and embroidery and was custom made by Chanel. 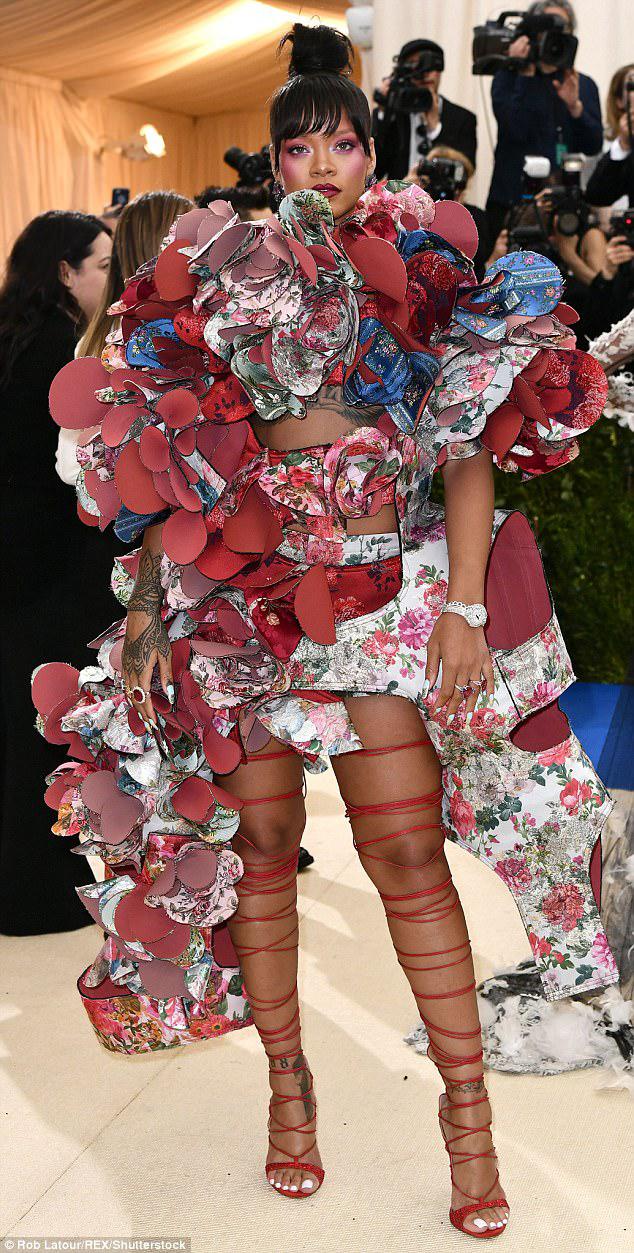 We were so geared to see how the slay bae will slay the Met Gala white carpet that within the first hour, “Where is Rihanna?” began trending worldwide on Twitter. And she did not disappoint in this Comme des Garçons Fall 2016 ready-to-wear outfit featuring flowers blooming all over her body. A look only Riri can pull off, coupled with the hot pink highlights on her face. That Rihanna reign won’t let up as she is the undisputed queen of this year’s Met Gala. 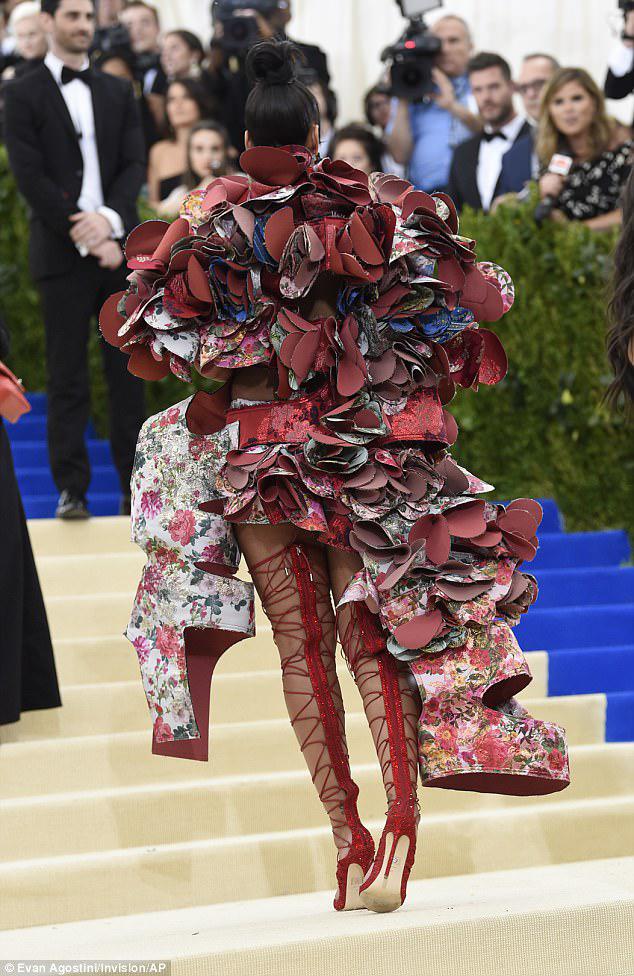