The fourth edition of 1:54 Contemporary African Art Fair bringing together over 40 exhibitors from 18 countries to showcase a diverse range of contemporary art from Africa and its diaspora came to an end today after five days at London’s Somerset House.

Its name inspired by the 54 nations that make up the continent, the annual art fair was founded by Touria El Glaoui in 2013 in a bid to provide an international platform for the showcase of African and African diaspora contemporary art.

While I hadn’t got the chance to visit previous editions of 1:54, this year I had the chance to attend two consecutive days and here are my top ten highlights.

Black and Blue: The Invisible Man and the Masque of Blackness – Zack Ové & Vigo Gallery

The first thought that came to mind as I entered the Somerset House courtyard and saw Zack Ové’s installation was #blacklivesmatter. Created especially for 1:54, the Irish-Trinidadian aritst’s army of masked Invisible men – 40 two meter high black graphite statues – comments on the relationship between power, beauty, identity and skin colour — a dynamic epitomised by the Masque of Blackness enacted by Anne of Denmark and her court ladies in 1605 to the disdain of James I.

Showcased by 1:54 in collaboration with Magnin-A was the first major solo exhibition in the UK of the late Malian photographer. – 45 black-and-white photographs celebrate the jubilance of post-independence Mali. 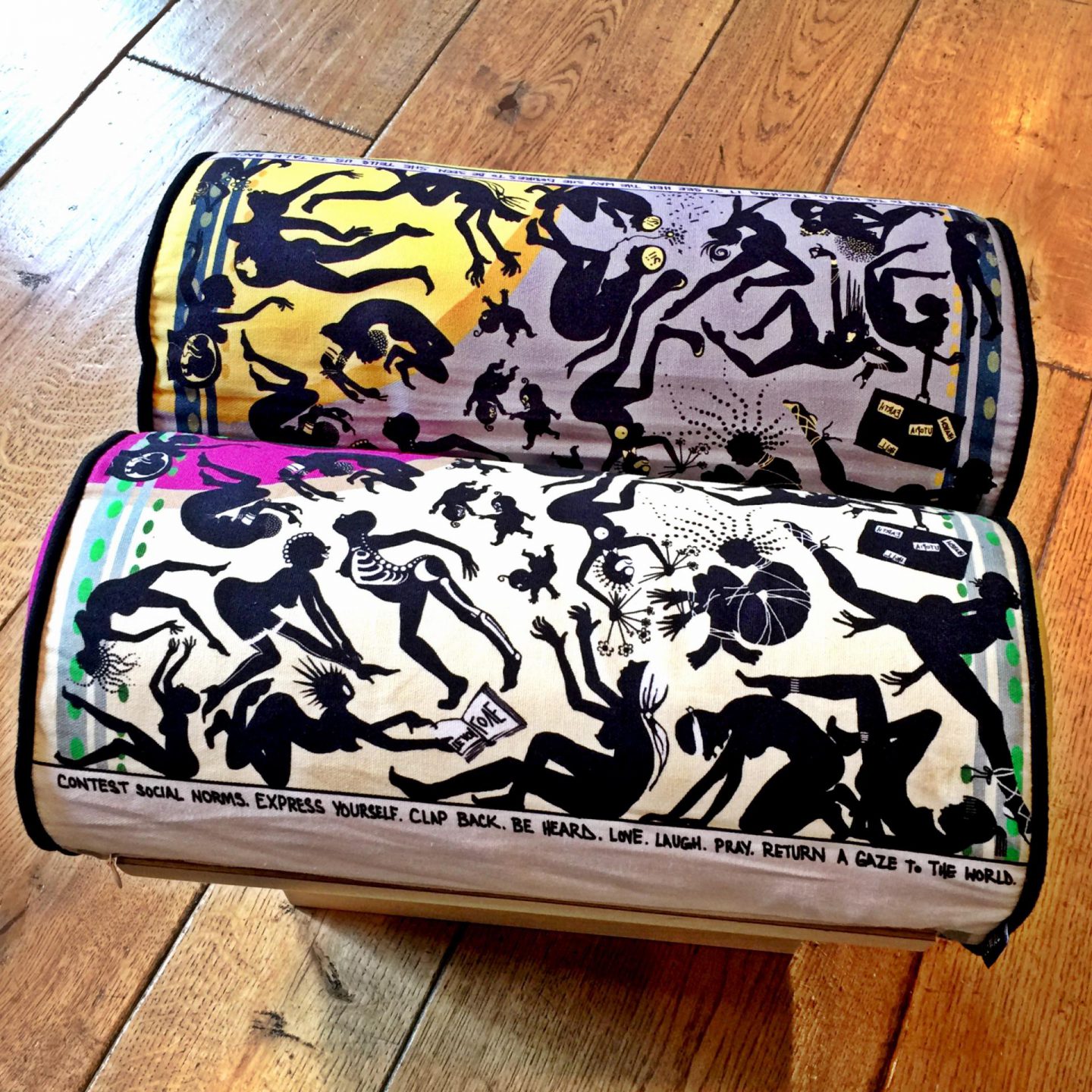 This year, as part of the Special Projects programme, Ifeanyi Oganwu has collaborated with Galerie Armel Soyer, textile firm Toghal and artistPhoebe Boswell to create a collection of pieces that will fill the lounge and bookshop. For 1:54’s lounge, Oganwu has created forty unique stools that will hold cushions produced by Toghal textile firm, and bearing distinctive prints designed by Phoebe Boswell. The name of the stool – Pedestal – beautifully expresses the intentions of the collaborative team, and the origins from which the piece grew from.

Another work which explores identity is this powerful piece by Alexis Peskine which references Congolese Nkisi sculpture, where nails are hammered into ritual sculptures to rile the demons within. Here, symbolically, Peskine is also putting the black male identity ‘under construction’ with constant attacks from outside world.

On display at Somerset House were only six prayer mats, instead of nine, due to limited space, and yet this was one of the most powerful pieces. Algerian artist works toy with cultural duality and imbalances, as well as cultural fusion and the ability to transcend borders. A controversial piece (Her 2008 piece ‘Silence’ exhibited at the Pavillon Vendôme in Clichy, was taken down by the photographer and Christine Ollier, following a complaint from a Muslim association), ‘Silence Noir’ showcases the curious blend of a woman’s faith and femininity, arguing that one does not need to negate the other.

“I can’t help but be drawn to these battles that we encounter within ourselves because I believe that  the moral decay we face in this generation can only lead to our own extinction,” says Ethiopian photographer Muluneh. The title of her first solo exhibition with the David Kruts Projects comes from an expression that Muluneh’s grandmother had repeated, in which she stated, “the world is 9, it is never complete and never perfect.”

A fascinating series, self-taught Nigerian visual artist Olatunji’s Tribal Marks Series are a collection of hyperrealist portraits informed by his extensive research into the age-old practice of facial scarification, and discussions with carriers of these marks. In Olatunji’s words, “The rendering process starts with the creative imaginings of the subject, considering personality, character, skin-type and even factoring in medical history in some cases. It involves fashioning a story around them and then drawing desired morphological characteristics from an exhaustive study of faces to produce unique portraits.” 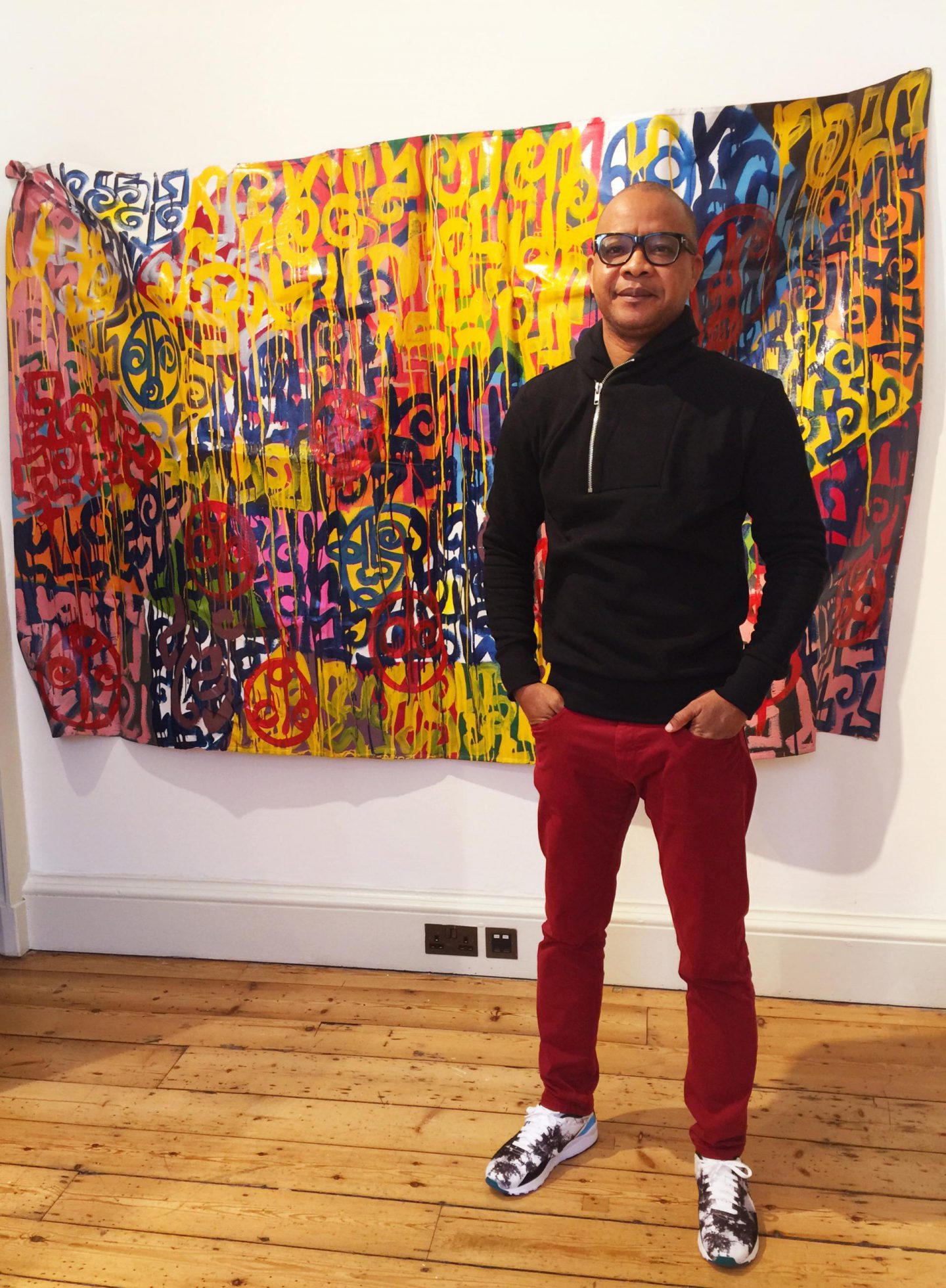 “My art process is a telling of an accumulated constructed, other-worldliness pictorial stories of many veracities. These works in their different shapes and styles approach the use of traditional material from the atypical corner of a storyteller. The paintings and sculptures propose that the artist’s canvas can stretch his/her narratives farther than the restraining corners of stretcher bars,” says Nigerian artist Ehikhamenor who produces abstract, symbolic, and politically motivated works that reveal his ties to the historical Benin Kingdom. Within the confines of the space dedicated to the Gallery of African Arts, his art takes us on a journey to the ancient Benin Kingdom and back, stretching the imagination to its wildest limits. 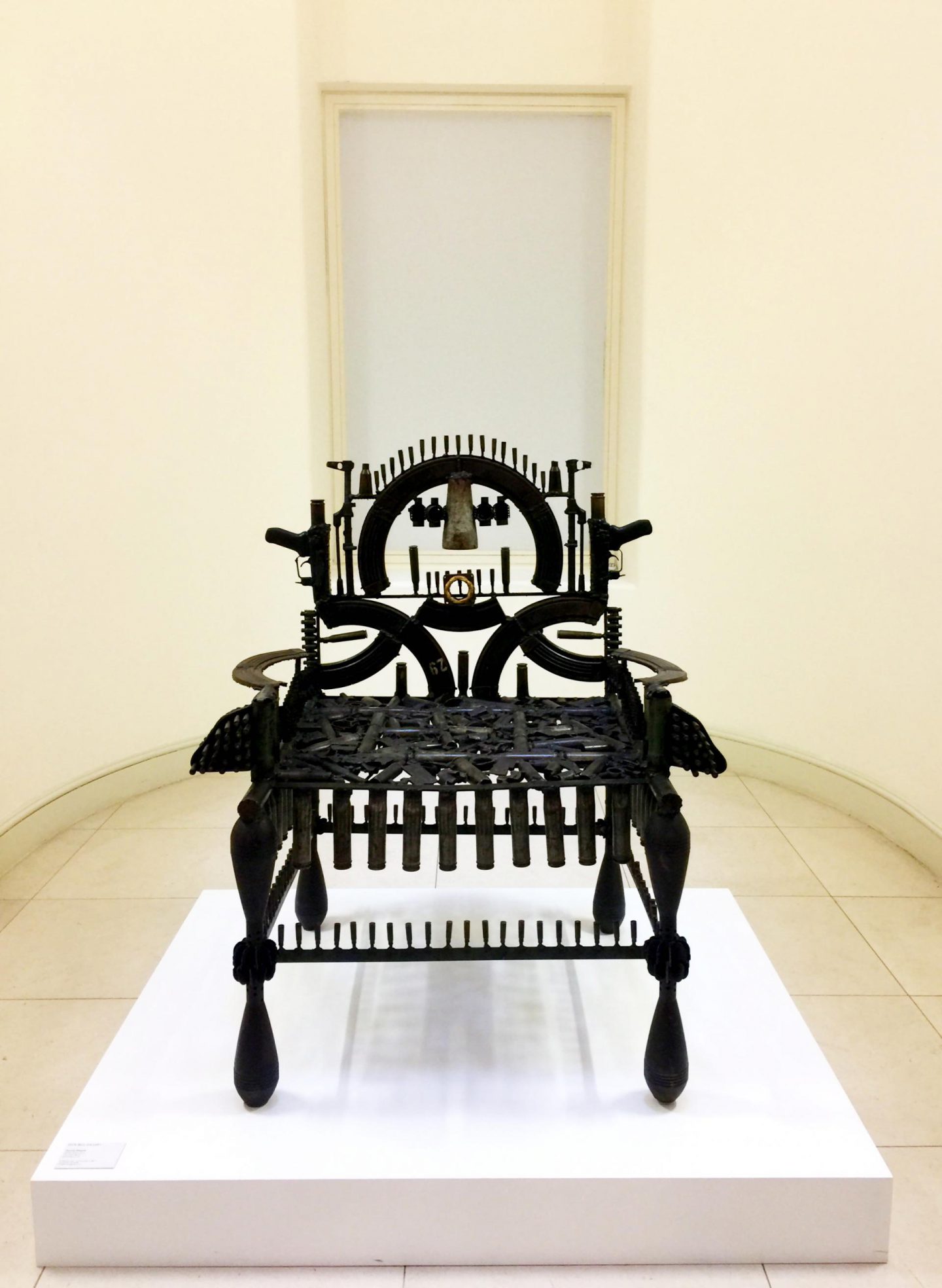 A work of art made out of weapons of destruction? Gonçalo Mabunda is interested in the collective memory of his country, Mozambique: a country whose long and terrible Civil War remains ingrained in the memories of its inhabitants. Working with AK47s, rocket launchers, pistols and other objects of destruction, weapons that were recovered in 1992 at the end of a fifteen-year conflict that divided the region, he creates art that is at once terrifying and yet a testament to the transformative power of art and the resilience and creativity of African civilian societies.

Equally haunting are Mohau Modisakeng’s intense, meditative self-portraits overlaying nightmare visions upon poetic narratives to communicate a sense of suppressed trauma, evoking the scars that persist from violence enacted under Apartheid. His images are not direct representations of violence, but powerful yet poetic invocations where the body is transformed into a poignant marker of collective memory. 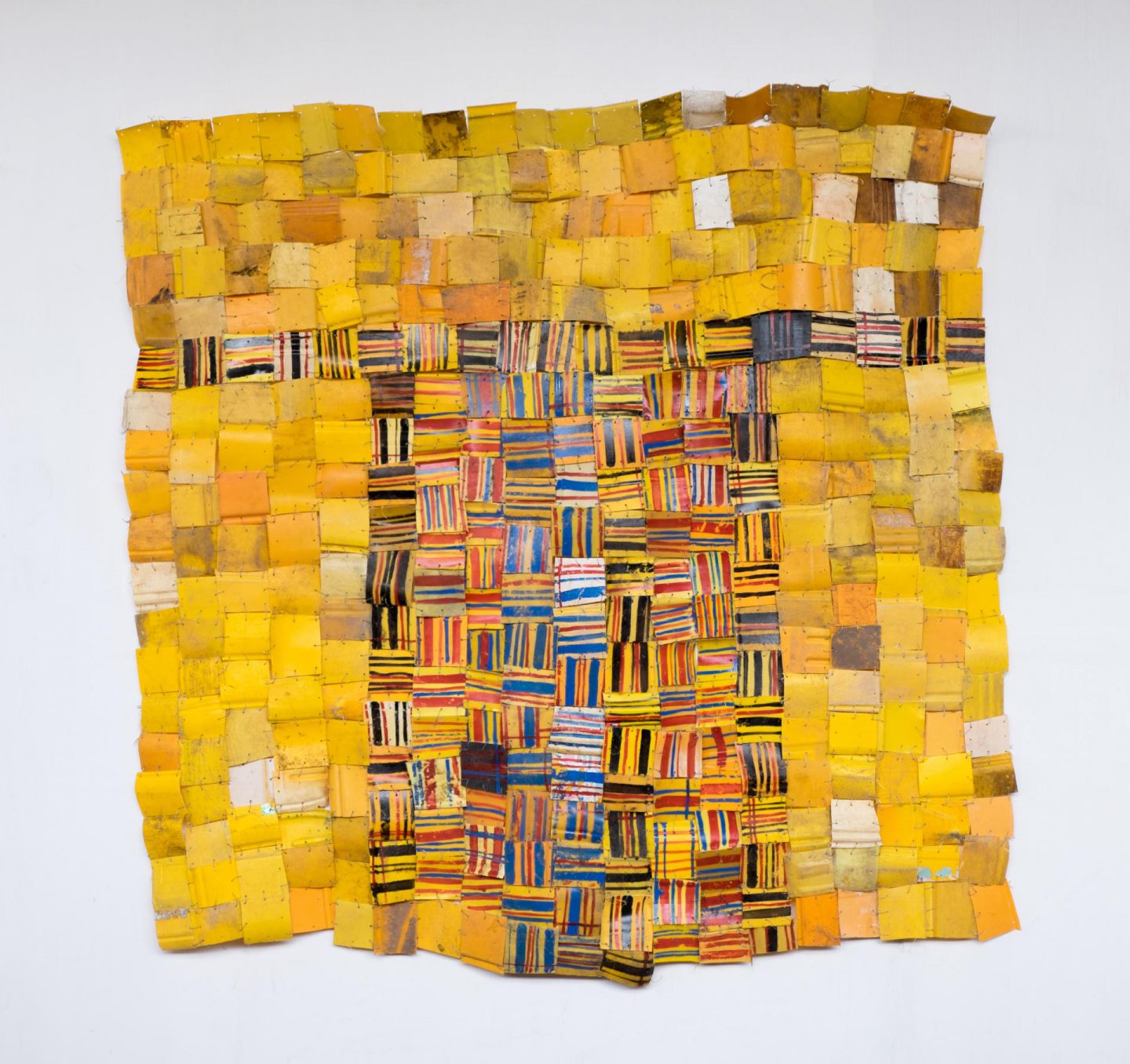 Another artist who works with the unexpected turning it into a work of art is the Ghanaian artist Clottey mines the agency of everyday objects in order to explore narratives of personal, family, and collective histories often relating to trade and migration. Afrogallonism comments on consumption within modern African through the use of yellow gallon containers.