It’s almost four weeks to Christmas, which in London means Christmas is approaching full throttle and outdoor ice rinks are here, making the capital most magical in the festive season. While I am not a fan of risking life and limb on ice, I love the magic of watching ice skaters from the sidelines while downing a cup of hot chocolate and feeling all Christmassy. And if you want to enjoy a day out getting into the festive spirit, you are spoilt for choice with a range of ice rinks dotted around the city. 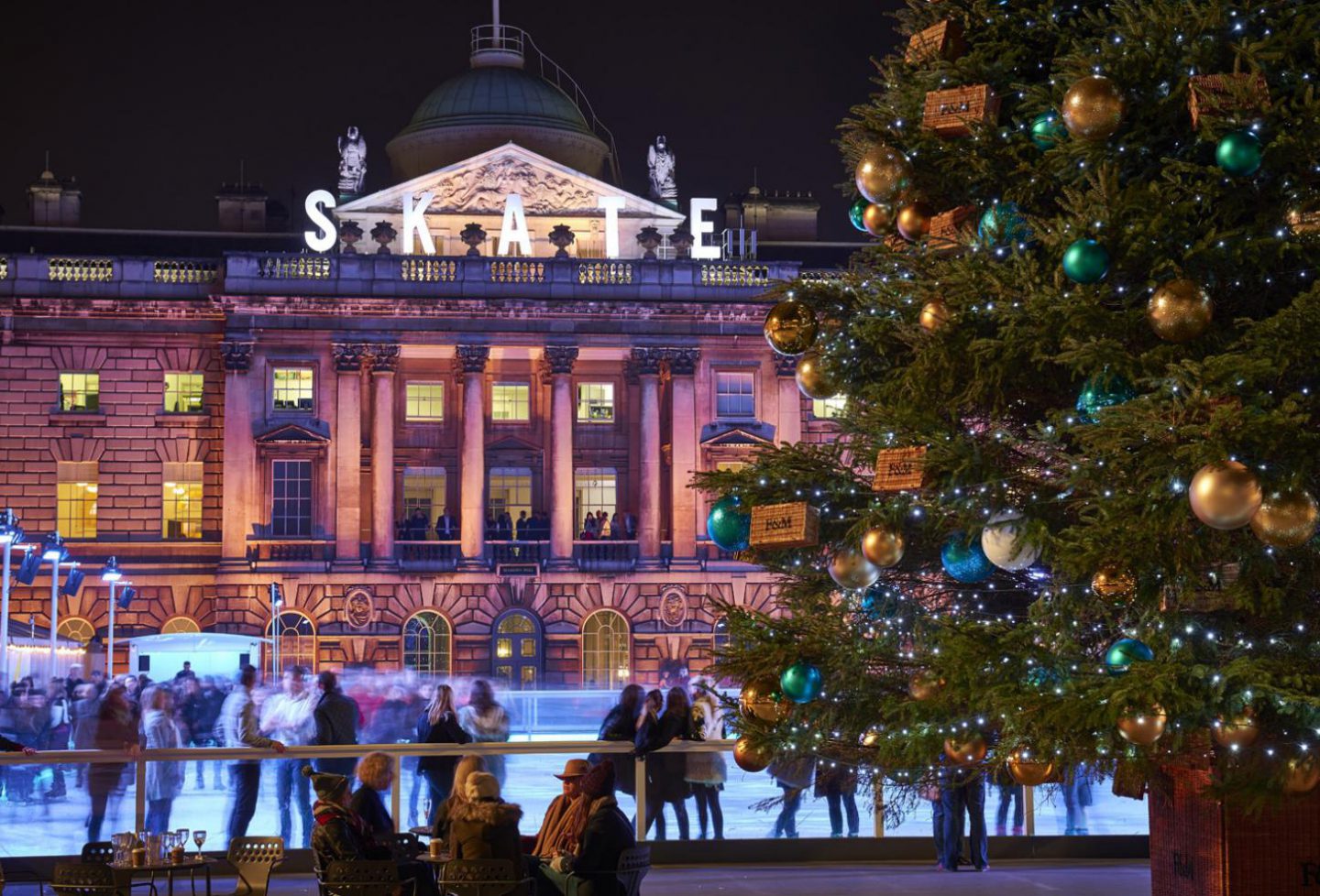 *on selected dates only

For the third year running, Fortnum & Mason turn the 18th-century courtyard into a winter wonderland with a 900-square-metre outdoor rink, Fortnum’s Lodge offering champagne, afternoon tea and even private dining; Club Nights featuring DJs from Rough Trade Records, Green Man Festival and a “sober morning rave” from Morning Gloryville. And you can sort out the Chistmas pressies with Fortnum & Mason at hand to help with the Christmas Arcade. 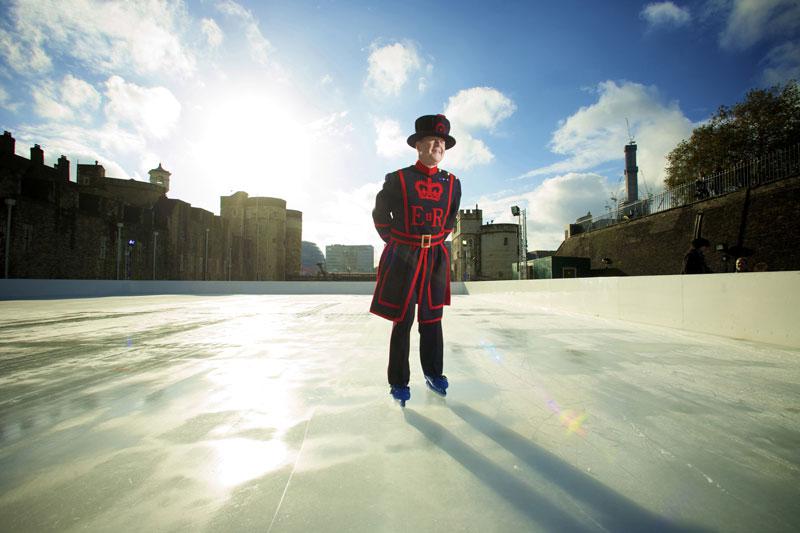 Sightseeing on skates? Tower of London Ice Rink makes it a reality, offering both fun on ice and a great historical setting all in one. It doesn’t get more dramatic than this!  Aprés-skate you can relax at the Eis Haus Ice Bar made completely from ice, as we serve you in a glass made of real ice and take in the jaw dropping views across the Tower. 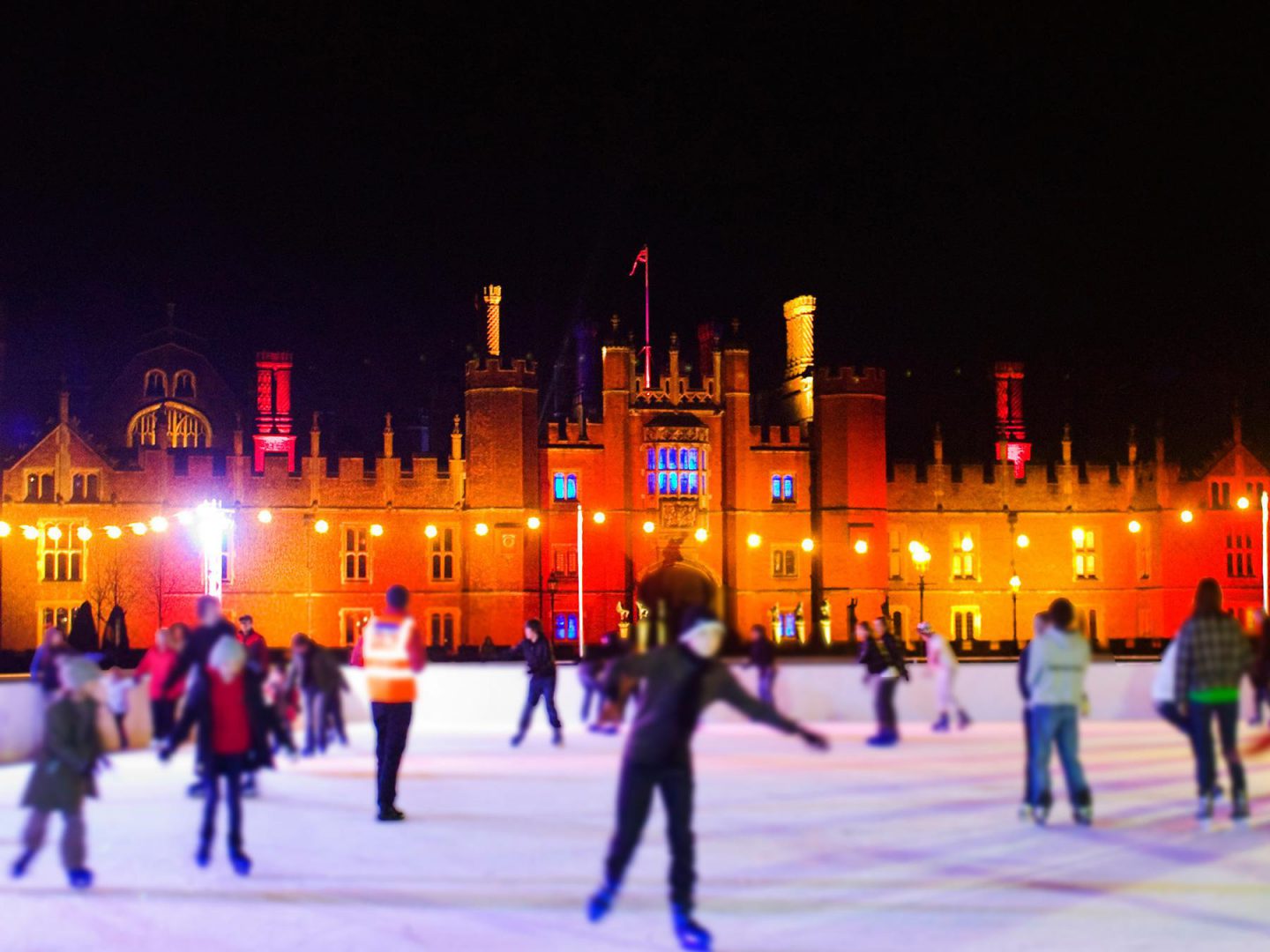 Another grand setting for outdoor skating this December is none other than Henry VIII’s sixteenth-century pad which plays hosts to a 900-metre-square outdoor rink. You can arrive early to enjoy a majestic afternoon tea for two fit for a King or Queen, and hit the ice in the evening to take in the romance of the rink, as the palace lights up with hundreds of coloured lights, adding to the ambience of this stunning location. 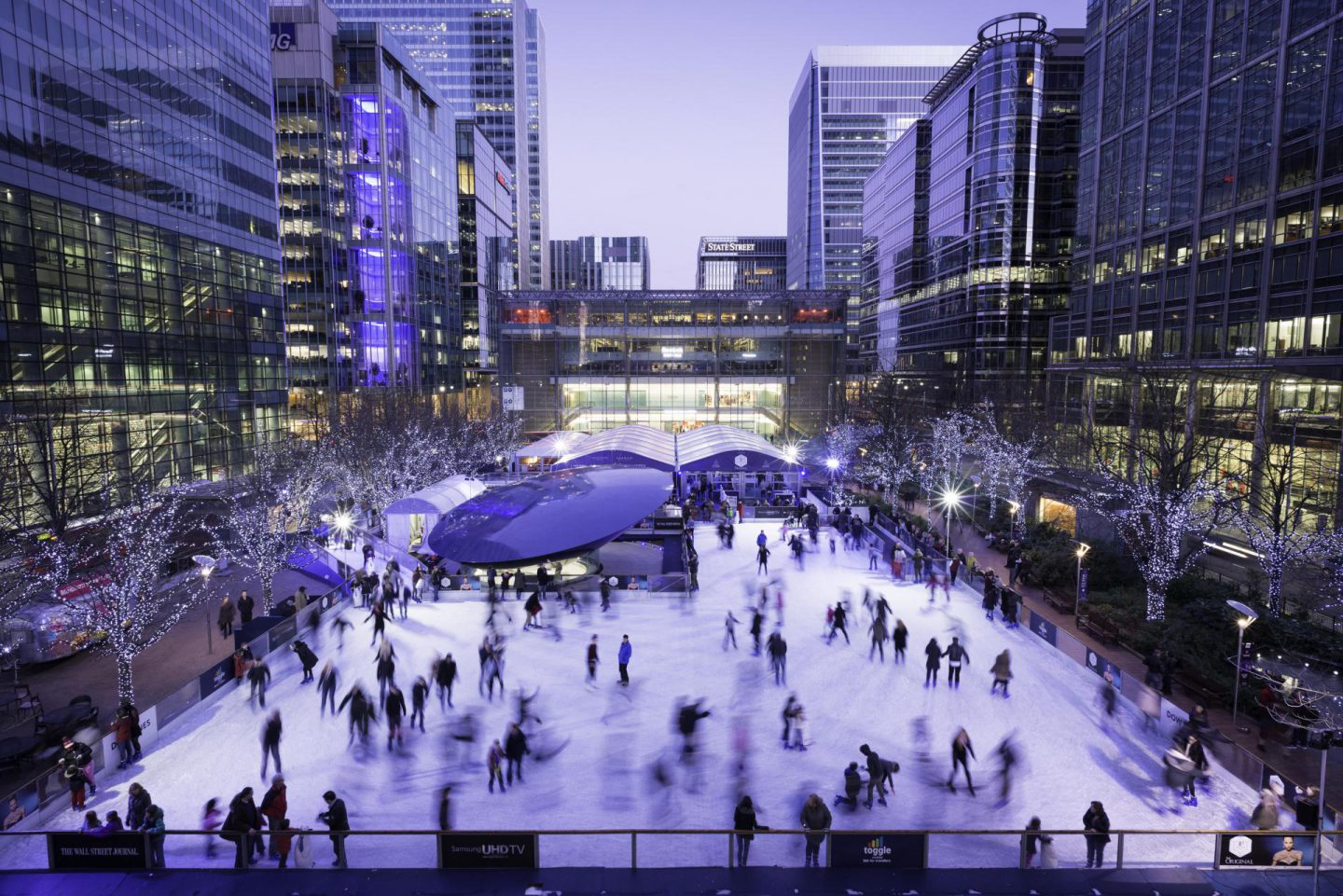 From the historic to the futuristic is the Canary Wharf Ice Rink which lends an incredible backdrop of grand high rises and over 8k of LED lights in line with this year’s theme ‘LuminoCity’. It simply cannot get any glitzier! Fitting for London’s financial district. For those who won’t venture on ice, the heated outdoor viewing terrace offers great views, drinks and seasonal snacks. 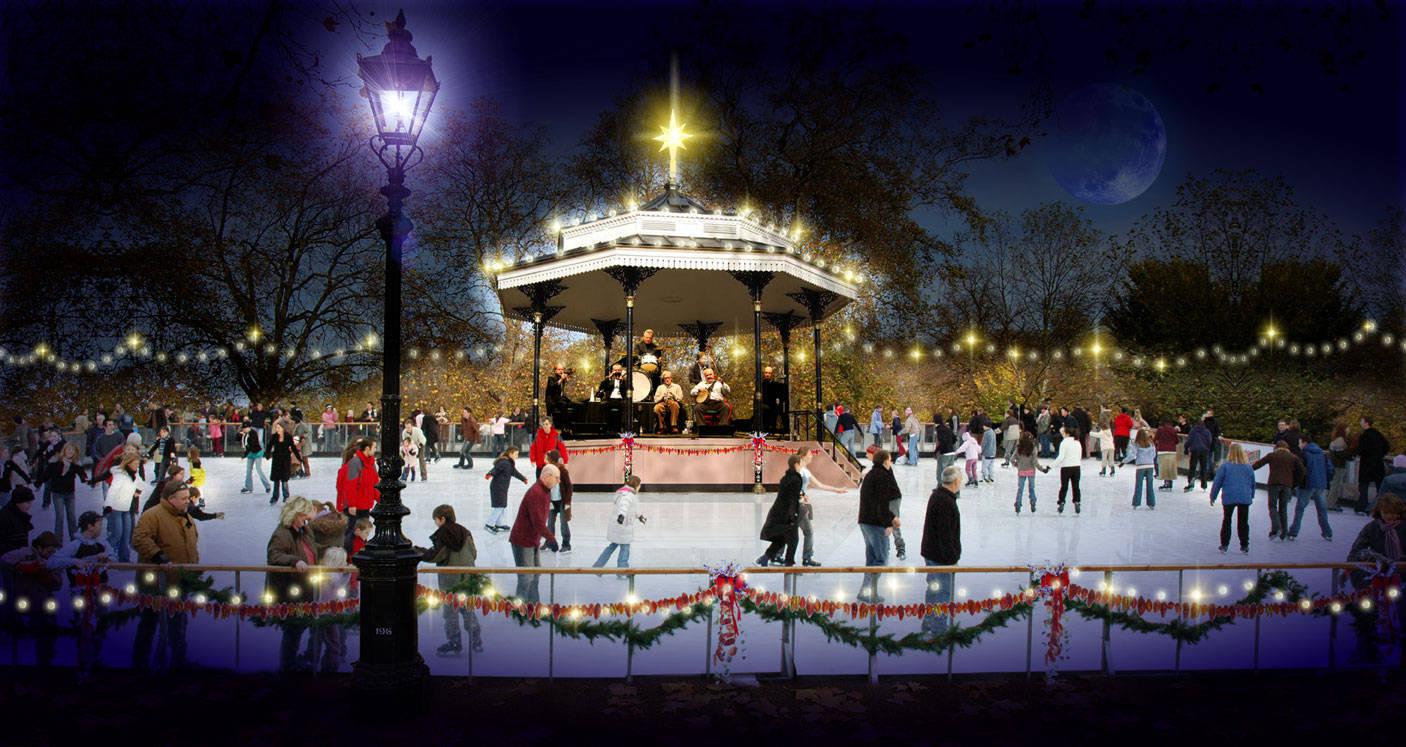 London’s ultimate Christmas destination is of course Hyde Park Winter Wonderland, back for the tenth year. Not only does it boast a the biggest outdoor ice rink in the UK, but also fairground rides, two circuses (‘Zippo’s Christmas Circus’ and ‘Cirque Berserk’),Santa Land (including Santa’s grotto), an observation wheel and the Magical Ice Kingdom, Christmas markets and themed bars, including the Ice Bar, so there is plenty of fun to be had for everyone, even the non-skaters. 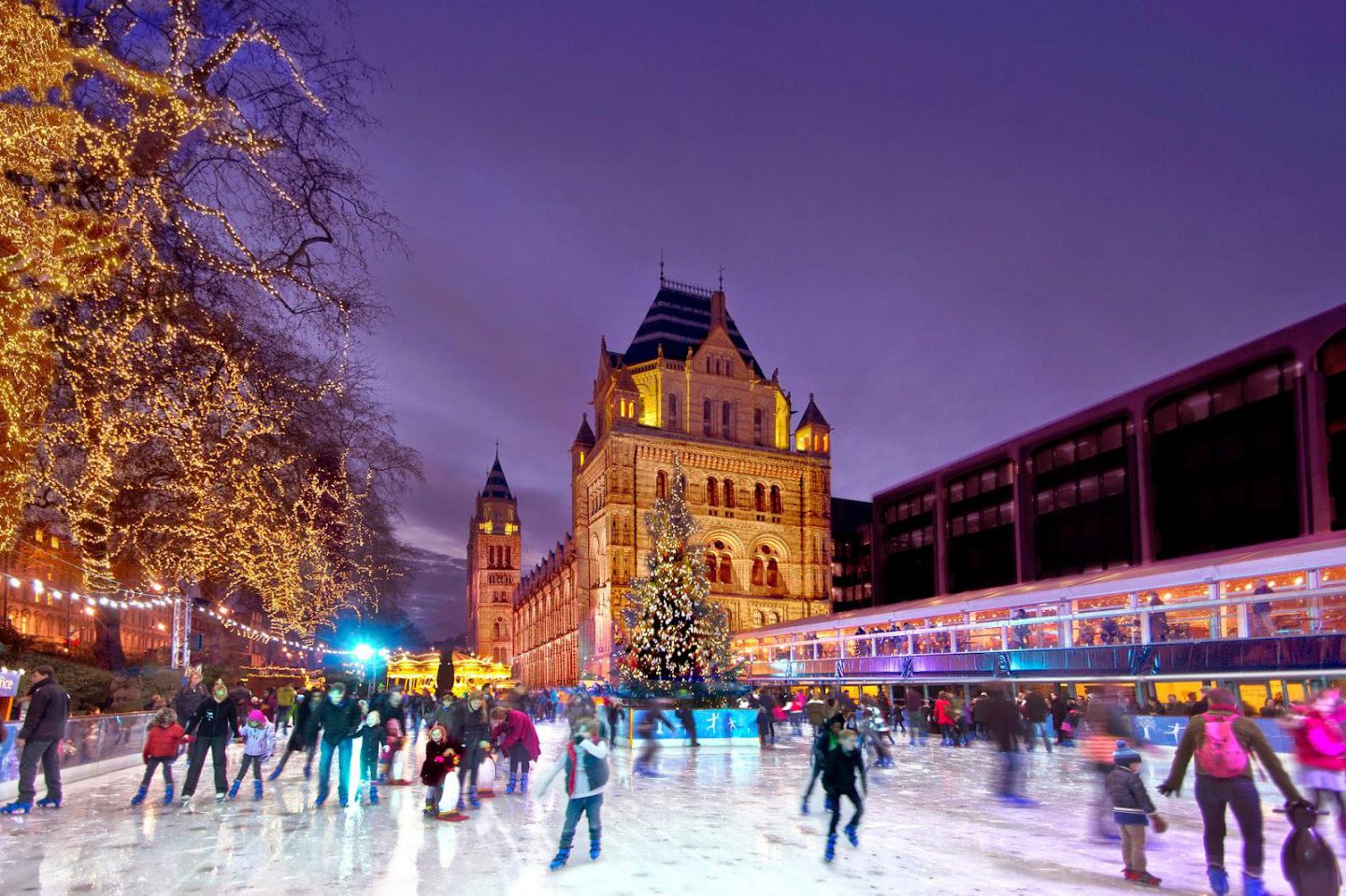 Against the beautiful backdrop of Alfred Waterhouse’s Natural History Museum buildings, complete with fairy lights and a majestic Christmas tree is possibly the capital’s most magical ice rink, back for the 12th year this December. With a bigger and a smaller rink for children, a fairground carousel, and a cafe bar overlooking the rink live music on Thursdays, you can create the most magical festive experience.