‘There are things even love can’t do . . . If the burden is too much and stays too long, even love bends, cracks, comes close to breaking and sometimes does break. But even when it’s in a thousand pieces around your feet, that doesn’t mean it’s no longer love . . .’

I knew right away seeing this blurb this year’s exciting debut Stay with Me byAyòbámi Adébáyò was going to be a promising read. From early March when I received my review copy from the books UK publishers, Canongate, life got in the way and I didn’t get a chance to dig into this novel. When Adebayo was shortlisted for Baileys Women’s Prize for Fiction, I just knew I had to dig into Stay with Me sooner rather than later. 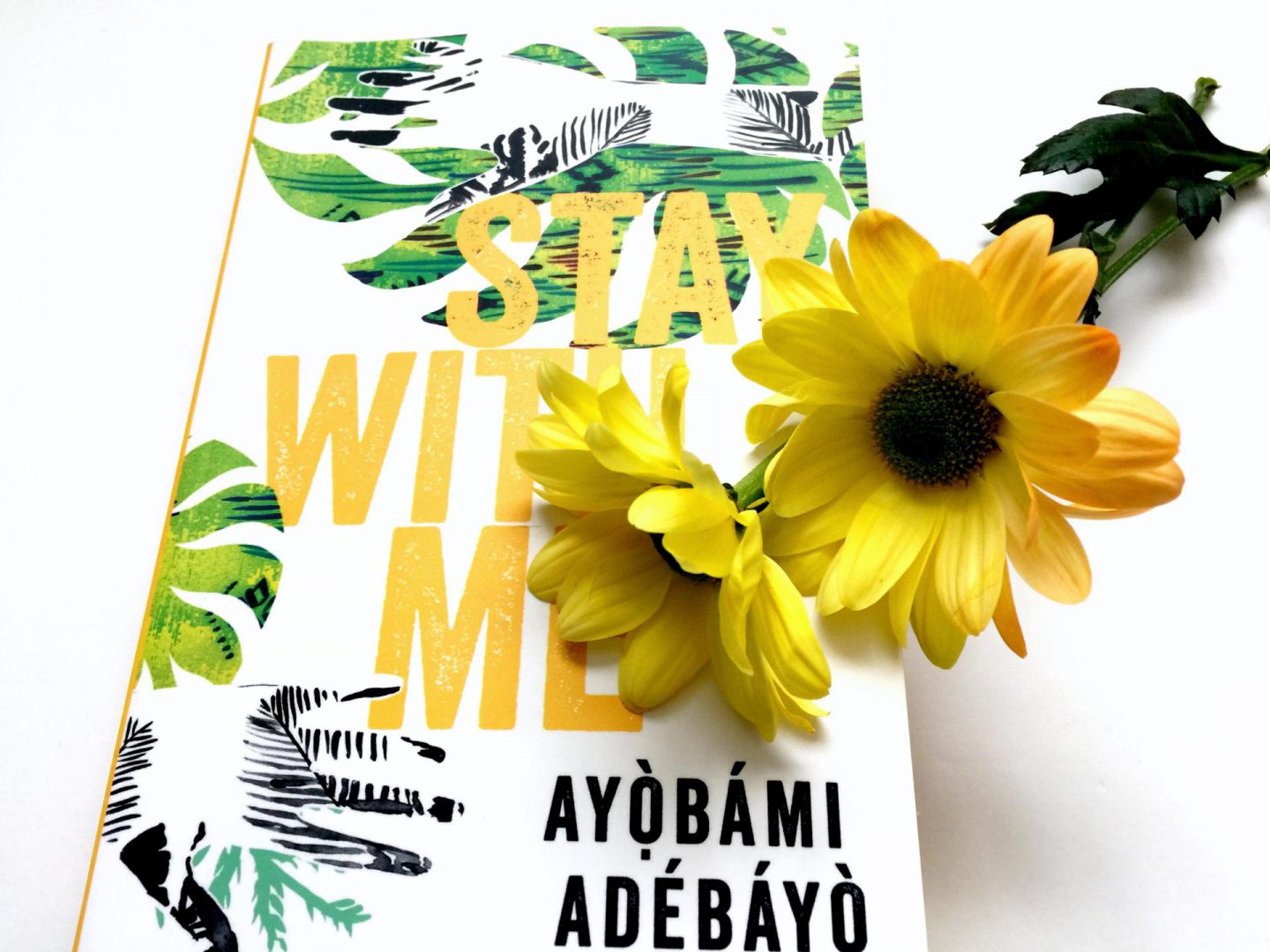 I’d like to think I was waiting for that opportune moment when, away from the hustle and bustle of the world, unhurried by daily demands on my attention, I could do Stay with Me justice, taking the time to fully digest Adébáyò’ words that have the power to pierce to the core, much worth the wait.

At the centre of the daily drama expected of any Nigerian family is Yejide and her husband Akin.

Yejide is a strong, spirited woman who has a loving husband and her own business. Yet she is a woman interrupted. Within the first few pages we are thrown into the heart of the storm – Yejide’s childlessness. Not yet aware of the family’s plans to install a second wife into her life, Yejide is “armed with millions of smiles. Apologetic smiles, pity-me smiles, I-look-unto-God smiles, name all the fake smiles to get through an afternoon with a group of people who claim to want the best for you while poking at your open sore with a stick, and I had them ready.”

What she least expects however appears in her living room and ends up becoming a permanent fixture in her life – a second wife. As the pressure of a second wife whose imminent arrival in her home rises, Yejide’s desperation reaches fever pitch.

To the Western reader, Yejide’s growing obsession and mad pursuit of a baby which sees her breastfeeding a goat at the top of “the Mountain of Jaw Dropping Miracles” in southwest Nigeria, surrounded by drooling bearded men in green robes whose leader, Prophet Josiah, has been recommended by a pregnant customer at her hairdressing salon and through a make-believe pregnancy that defies all logic and medical evidence to the contrary. If you are familiar with the Nigerian culture, you will know that infertility is treated as a curse, and an infertile woman as less of a woman.

“I was not anybody’s mother. People still called me Yejide. I was not Iya This or Iya That. I was still merely Yejide. That thought tied my tongue and made me want to pull hers out of her mouth” are Yejide’s thughts upon being called “our mother” by Funmi, the second wife forced upon the unwilling Akin.

She is not only pitied but as the new wife appears on the scene despised for her barrenness, reduced to a mere obstacle to abundance and her in-laws’ happiness. In a bid to ensure the second wife can conceive her mother-in-law – once the affectionate Moomi – pleads with Yejide to “close your thighs to him. I beg you… If you don’t chase him away he won’t touch Funmi. If you don’t he will die childless. I beg you, don’t spoil my life.”

Yejide’s struggle with her status as a childless mother brings back memories of her formative years growing up as a motherless child and compounds her sense of isolation, also putting into perspective the importance of the companionship her marriage with a loving husband provides for her. A flashback to her father’s funeral further highlights her isolation with her step-mothers and siblings standing away from her and the notion that even if she were to stand near them, they would move away again. The only one standing by her is Akin.

Eventually when she does conceive, the struggle is to hold on to what her mother-in-law believes are Abiku children, who come back into life time after time with no intention of staying put, indifferent to the plight of its mother and her grief. Grief multiplies with each child gone too soon, defeated by Sickle Cell. “No one was lost for words. They all knew what to say,” Yejide muses at her first child’s funeral, “Don’t worry you will have another child… No one was sorry Olamide had died. They were sorry that I had lost a child, not that she had died.”

While Yejide’s grief is writ large, alternating narratives between husband and wife which span the course of their marriage blighted by infertility, heartache and grief and their early courtship give us an insight into Akin’s inner workings and his misguided attempt at easing his wife’s pain which will cost him dearly. We fail too judge him to harshly for his trespasses as they were taken in a desperate bid to save Yejide from heartache. It is clear to see this is a man in love with his wife despite what society would have him do, and while he may not have always been honest with her, he is honestly trying to make it up to her.

This here is a novel which in lifestyle magazines’ lingo “unputdownable” as we hurtle through the well-paced plot genuinely caring for the central characters and what will become of them.

Adébáyò has been tutored in writing by both Margaret Atwood and fellow Nigerian author Chimamanda Ngozi Adichie, and it shows. She is considered as Adichie’s successor and it’s easy to see why. This is a well-structured novel, with life-like characters, with even those on the sidelines like Yejide’s rival hairdresser Iya Bolu or her mother-in-law Moomi painted in such great detail through their idiosyncrasies, while adding some comic relief to the novel.

The subject matter is heavy but never heavy-handedly handled; there is always a sense of hope that no matter how bad her current situation, Yejide will overcome the fate she’d been dealt. That’s not to say that, she is flawless; it is only that her flaws are human enough to forgive her

My only gripe? While the story unravels against the social and political turbulence of 1980s Nigeria, the politically precarious time serve only as a distant backdrop, thereby losing its impact and urgency, until the novel’s denouement where there is a real sense that it is finally woven into the fabric of the plot and can change the course of the characters’ lives. Then again, the strengths of this stellar debut more than makes up for this small gripe.

You can buy Stay with Me here.